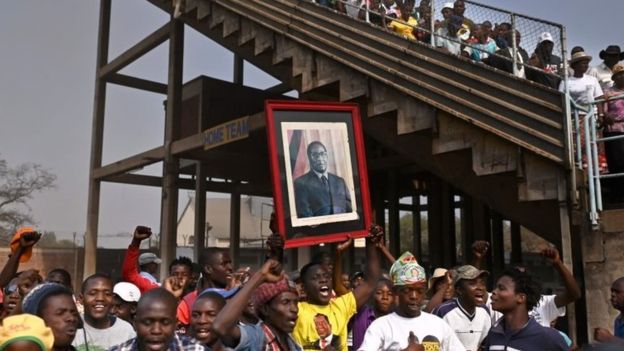 Zimbabwe’s former President Robert Mugabe will be buried in the National Heroes Acre monument in Harare, his family says, following a row with the government over his final resting site.

Family spokesman and nephew Leo Mugabe says the date is yet to be determined.

Before that there will be a public ceremony at the shrine in the capital on Sunday, followed by a ceremony at Mr Mugabe’s home village.

Mr Mugabe, who was 95, died last week while being treated in Singapore.

His body is now lying in state at the Rufaro football stadium in the capital.

Before Sunday’s ceremonies, a state funeral will be held on Saturday. Heads of states of a number of countries are expected.

What did Mugabe’s family say?
Leo Mugabe told the BBC that after Sunday’s public ceremony in Harare, Robert Mugabe’s body would return to his home village of Kutama.

Clan chiefs and the family would be allowed to perform their own ceremonies there.

Mr Mugabe would be buried at the National Heroes Acre monument only at a later date, possibly in a month’s time, Leo Mugabe added.

This, he said, would allow time for a shrine to be constructed at the National Heroes Acre monument.

“This whole process is to restore his legacy after 17 November 2017. We are ready to do this so that the public can see this is the founding father of our nation and therefore the shrine should be different and show the respect the whole nation is bestowing on him,” Leo Mugabe said.

He added that he took comfort in the way his uncle was being mourned, a sign, he said, that people continued to back Mr Mugabe’s policies.

The family had earlier expressed shock at not having been consulted by the government about the funeral arrangements.

President Emmerson Mnangagwa had declared Mr Mugabe a national hero after his death, indicating he should be buried at the national monument.

Mr Mugabe’s family is said to be bitter over him being ousted by his former ally Mr Mnangagwa two years ago.

Mr Mugabe fired Mr Mnangagwa in 2017, in what many believed was a way to prepare for his wife, Grace Mugabe, to succeed him.

Leo Mugabe said that the family knows it has to move on from the coup against his uncle.

“One thing you cannot remove is the scar that was within him before he died. But let bygones be bygones because the living must continue,” he added.

It’s an awkward tug-of-war. A reminder of the furious power struggles that consumed Mr Mugabe’s last years: the feuds, plots and alleged poisonings, that culminated in 2017’s military coup.

Zimbabwe’s current leadership – those behind the coup – may be keen to paper over those divisions now.

And a veneer of decorum is likely to prevail.

Stadium stampede
Meanwhile, thousands of mourners have been queuing up at Rufaro stadium to pay their respects to Mr Mugabe.

There was a brief stampede on Thursday as people rushed forward to catch a glimpse of the former leader, the Reuters news agency reported.

Trust Nyakabawo told Reuters at the Rufaro stadium: “We are in pain after his death because we were so used to seeing him alive as a father figure that led the country well.”

Rufaro Stadium is where Mr Mugabe was sworn in as Zimbabwe’s first leader in 1980.

Who was Robert Mugabe?
Mr Mugabe was Zimbabwe’s first leader after the country became independent in 1980. He held on to power for almost four decades before being ousted in the 2017 coup.

During his early years, he was praised for broadening access to health and education for the black majority.

However his later years were marked by violent repression of his political opponents and Zimbabwe’s economic ruin. An increasing number of critics labelled him a dictator.

He seized land from white owners in 2000.

Mr Mugabe famously declared that only God could remove him from office.

In 2017 he was placed under house arrest and four days later, replaced as the leader of his party Zanu-PF by his former vice president, Emmerson Mnangagwa.

Mr Mugabe initially refused to resign. But, on 21 November, as a motion to impeach him was being debated in the Zimbabwean parliament, the speaker of the House of Assembly announced that Robert Mugabe had finally resigned.

Mugabe negotiated a deal which protected him and his family from the risk of future prosecution and enabled him to retain his various business interests. He was also granted a house, servants, vehicles and full diplomatic status.