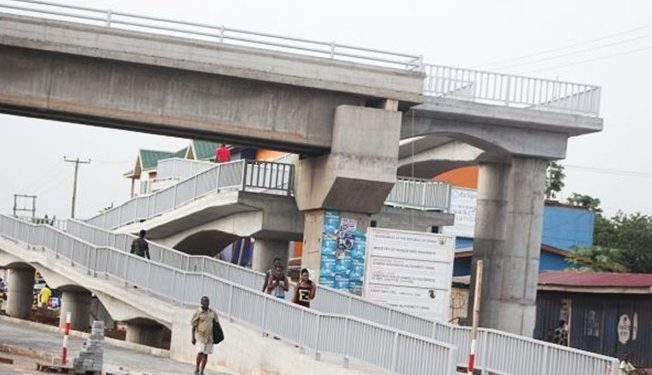 The 110 pedestrians arrested for failing to use the Madina-Adentan footbridges have been granted bail.

The Madina Division Motor Traffic and Transport Department Commander, Paul Wesley Baah made this known on Eyewitness News on Wednesday.

“We have arrested 110 pedestrians. It was a single operation. They flouted the Motor Traffic Regulations. We have granted them bail. We are not keeping them in custody. We will continue and make sure there is compliance on the road,” he said.

According to the Road Traffic Regulations 2012, a pedestrian who fails to use a footbridge or an underpass where one is provided commits an offence.

Mr. Wesley said those arrested will later be processed for court.

“We will take them to court. If they have any explanation, they will say it in court,” he told host of Eyewitness News, Umaru Sanda Amadu.

Most of those arrested did not use the footbridge located at Zongo junction but instead jaywalked thereby risking their lives and that of other road users.

The exercise was carried out after series of appeals by the police for pedestrians to use the recently completed footbridges failed.

Authorities had complained about the low patronage of the footbridges despite an earlier national uproar over the lack of such facility on the Madina-Adentan stretch.

All the six footbridges, located at Firestone, Madina-Zongo Junction, Redco Junction, Ritz Junction, SDA Junction and WASS had until recently been left uncompleted and unusable.

But after the footbridges were completed, there was complaints that the bridges were too long and caused serious inconvenience due to the length.