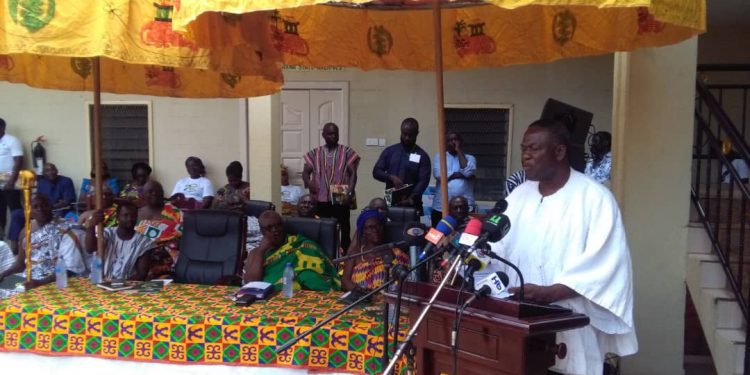 The Ministry of Chieftaincy and Religious Affairs has heaped praises on Okyenhene Osagyefo Amoatia for his contributions to society.

According to the ministry, the overlord of the Akyem Abuakwa Traditional Area since his enstoolment in 1999 has been a major player in the peace process in the country.

Speaking as the special guest of honour at the media launch of the 20th Anniversary of Osagyefo Amoatia Ofori on the golden stool, Minister for Chieftaincy and Religious Affairs, Samuel Kofi Dzamesi described Okyenhene as being a unifier and father for all.

“After Osagyefo was enstooled the Ministry of Chieftaincy and Religious Affairs have seen and witnessed some key things he has done to help the entire nation as a whole so it is in order for us to acknowledge his achievements which I will like to touch on some few”.

“First and foremost is about environmental conservation. Through his initiatives we are now seeing trees being planted all over. He again spoke against illegal mining known as galamsey and the president also embraced it and through that an interministerial committee was formed to deal with galamsey”.

“Also through Osagyefo’s initiatives a number of roads which used to be in bad conditions have been constructed, schools have also been established including a university. He has also made chieftaincy very attractive to the extent that now everyone in Ghana wants to experience kingship”.

Hon. Dzamesi added that: “When Osagyefo became the president of the region, he’s been able to settle long-standing dispute notably the Akwamuman dispute. We tried several times to resolve the Akwamuman dispute but we couldn’t Okyehene however under his leadership has addressed the issues and now calm has been restored in Akwamu”.