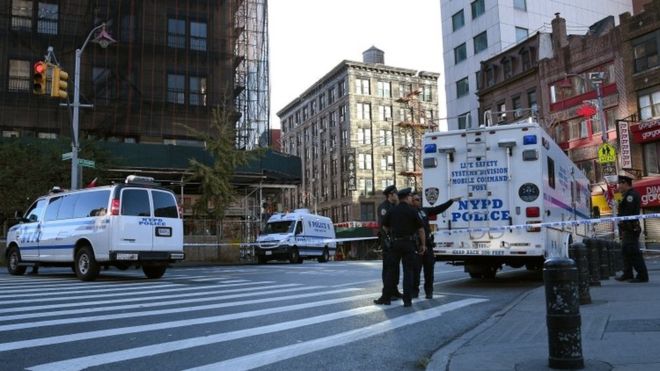 Four homeless men were battered to death in New York on Friday night, with a fifth critically injured, police say.

Their suspected killer was detained by police as an attack was in progress in Chinatown and the suspected weapon, a long metal object, was recovered.

All of the victims died of blunt trauma to the head and appear to have been asleep when they were attacked. They have not been named.

They were assaulted at three different locations in Manhattan.

A suspect is in custody but has not yet been charged, the Associated Press news agency reports.

Police are still investigating possible motives for the attack.

What else are US media reporting?

The man who survived was the second to be attacked and was found a short distance away from the first. He was taken to New York’s Downtown Hospital in critical condition. The other three men were killed a street away.

The attacks took place in both Chinatown and the Lower East Side, the New York Times reports.

Michael Baldassano, chief of Manhattan South detectives, described the weapon as a “pipe”, said to be about 3ft (90cm) long.

What do we know about the suspect ?

Police have not identified the suspect, but said the person was homeless and appeared to have carried out the attacks at random.

Associated Press reported that a 24-year-old man, Randy Rodriguez Santos, was in police custody and is expected to be charged in court on Sunday morning.

Unnamed family members of Mr Santos told the New York Daily News that he began “using drugs” after he arrived four years ago from the Dominican Republic, where he was born.

He has been arrested at least six times in the past two years, police say.

His mother, Fioraliza, said she threw him out of her house after he allegedly assaulted her, the Daily News reported.