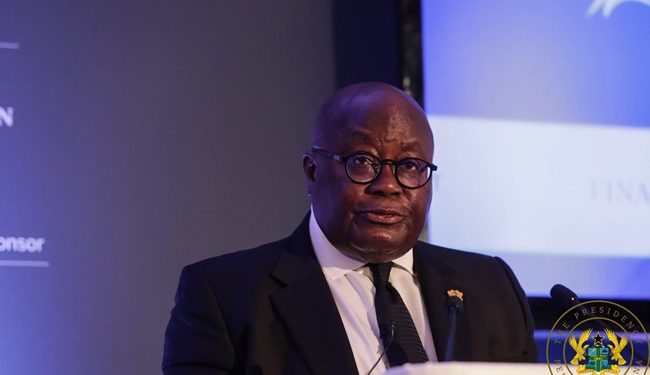 President Nana Akufo-Addo has said his government is working tirelessly to fix deplorable roads in the country.

At a time when many more Ghanaians are getting agitated over the poor state of roads in many parts of the country, the President noted that he is aware of the struggles commuters go through in their day-to-day activities due to the poor road networks.

Speaking at the sod-cutting ceremony for the construction of the US$135 Million Obetsebi Lamptey Interchange in Accra, Nana Akufo-Addo assured that, the government is committed to addressing the problem of deplorable roads in the country.

“We are tackling critical road projects in a holistic manner to ensure that every part of the country has quality all weather roads. These many projects being taken by the government to improve the road infrastructure of the nation.”

Despite similar assurances and pledges on multiple occasions,  no significant action seems to be achieved leaving most residents to resort to demonstrations to pressurize the government to fix their roads.

The construction of the Obetsebi-Lamptey Interchange, the President said, is part of a number of actions being undertaken by the Government to improve urban mobility within the western parts of Accra.

“The good news does not end here. The Ministry of Finance has released GH¢2.2 billion to the Ministry of Roads and Highways for payment for works done by road contractors across the country. This will improve the cash flow of our contractors, and ensure that those who had left their construction sites return to complete their projects,” he added.

Meanwhile, President Akufo-Addo directed the Ministry of Roads and Highways to monitor closely the performance of every contractor engaged by the Government and further instructed the Ministry not to hesitate to terminate the contracts of non-performing contractors.