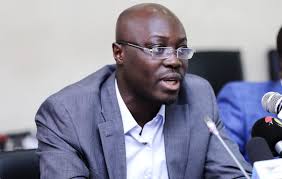 Ranking Member on Parliament’s Finance Committee, Cassiel Ato Forson, has “strongly disagreed” with claims of sabotage by the Telcos in the implementation of the 9% increment in the Communication Service Tax (CST).

Chairman of Parliament’s Finance Committee, Dr. Mark Assibey Yeboah on Wednesday claimed that the instant talk tax deductions by the Telcoms is a deliberate strategy to make the government unpopular.

But According to Ato Forson, Ghanaians have always been in the know about the deductions prior to the recent increment in the CST.

Speaking on Eyewitness News, Ato Forson explained that the Telcos had to adopt the new style of notifying customers immediately of deductions on their recharges in order to avoid the accusation of cheating that has always being leveled against them by consumers.

“First of all, let me say that I strongly disagree with my colleague the Chairman of the Finance Committee in the sense that an increment of 50% is quite substantial and again it is important to know that Telcos have been charging this tax and it has been reflecting on our bills from day one. The difficulty is that often times Ghanaians blame the Telcos of that they buy credit and they have cheated them in the usage of the credit and so for that matter, it is important for them to show to all of us how much of this component goes into the credit itself and how much goes into taxes.”

He further questioned government’s decision to approve the increment in the CST if they didn’t want Ghanaians to know about it.

“Let me say that if government is afraid of such a tax, why did they introduce it in the first place? Is it not true that they have actually increased the CST by 50%, and that it was first introduced by the NPP government in 2008 and this administration has increased it by 50%?”

Allegations made by Assibey Yeboah

Dr. Mark Assibey Yeboah had chided telecommunication companies over their mode of implementation of the 9% increment in the Communication Service Tax.

According to him, the operation of the Telcos is a deliberate strategy to create disquiet for government.

Many have complained about the immediate tax deduction after consumers recharge, followed by a text message.

For instance, a recharge of GHc 10 worth of talk time gives consumers GHc9.2 as a result of the tax.

Speaking to Citi News after an Article IV consultation with the International Monetary Fund (IMF) on Wednesday, Dr. Assibey Yeboah questioned the motive of the Telcos for implementing the tax in such a manner.

“The telcos want to make gov’t unpopular because why didn’t send the text mages of the deduction when the tax was 6 percent. They were paying the government and we knew how much we were collecting from them so if any body tells me they were absolved by the Telcos, then that is absurd”, he fumed.