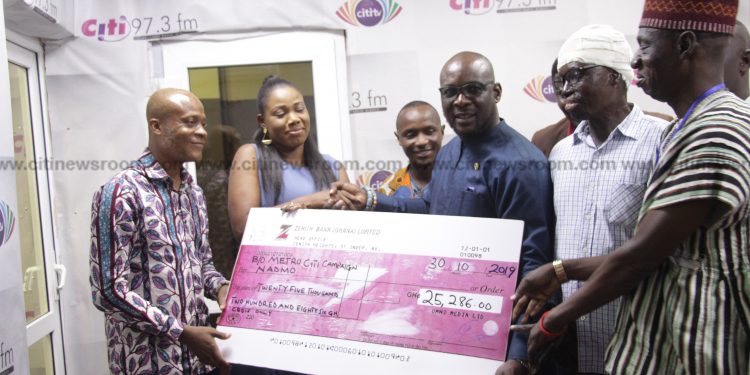 A collaboration between Citi FM, Metro TV and Fidelity Bank has yielded some GH¢25,000 which has been donated to the National Disaster Management Organization (NADMO) for onward disbursement to victims of the June 3 flood and fire disaster.

Following the twin flood and fire disaster on June 3 that led to the death of some 154 people and left many others injured, Citi FM, Metro TV and Fidelity Bank in 2015 launched a campaign to solicit for relief items to support persons who were affected by the incident.

The three organizations, as part of their first outreach on June 11, 2015 at the Adabraka Sahara Park, Osu Alata, Osu Doku and Osu Manhia saw about 8000 affected persons benefiting from relief items.

Some of the victims have also received some compensation from the state, while others indicated that they had been abandoned and neglected since the incident happened.

Seji Saji, a Deputy Director of NADMO said the donation was very important to support the upkeep of the victims.

While expressing his appreciation for the donation, he gave assurances that the money will be used for the intended purpose.

“The 3rd June Disaster disbursement Committee is grateful to Metro TV and Citi FM for this support and we assure you that it will go to meet the intended purpose for which the money was raised,” he said.

Editor for Metro TV, Peter Serenye on the Citi Breakfast Show on Wednesday said the collaboration was to ensure that some extra funds were made available to help the disaster survivors keep up.

“It is part of our Corporate Social Responsibility, and when the disaster occurred, we decided to collaborate with Citi FM and Fidelity Bank and a small committee was set up to see how we can raise and put it in that Fidelity Bank account so we see how we can disburse it to people who still need it for their upkeep,” he said.

A survivor of the incident who will benefit from the support, Kassim Suraj also expressed his gratitude to the management of Citi FM and Metro TV for the initiative.

Oquaye turns down Minority’s request to summon Housing Minister, others over floods

Oquaye turns down Minority's request to summon Housing Minister, others over floods