Asokwa: Man dies after reportedly being struck by lightning 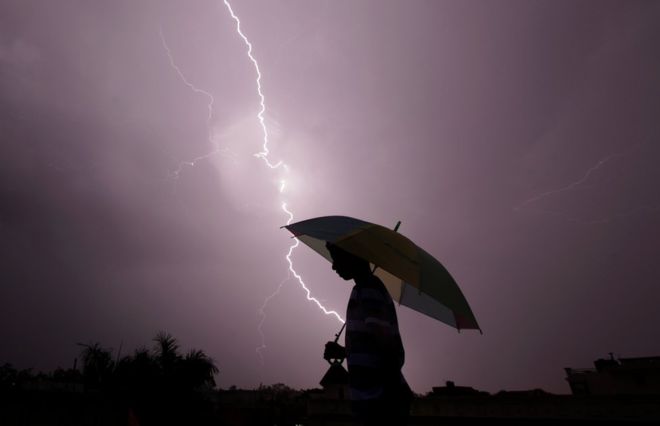 At least 2,000 people have died in lightning strikes in India every year since 2005

Police at Asokwa have conveyed the corpse of a man to the Komfo Anokye Teaching Hospital morgue after he was reportedly struck by lightning at Sewia Junction in the Ashanti Region.

The deceased, who is said to be in his 30s, was only identified as Yaapono.

According to the Assemblymember for the Kyirapatre Electoral area, Bismarck Osei Tutu, the incident happened when the deceased was relaxing with his friends at a popular drinking spot in the area.

The Assemblymember noted that when the deceased was found, “the thunder had struck him and part of his clothes was burnt.”

Meanwhile, the body of a separate man has also been recovered after he drowned at Esreso-Adagya during a downpour on Friday evening.

According to eyewitnesses, he jumped into a drain during the downpour.

The victim, said to be in his 20s and yet to be identified, was in the bucket of a Kia truck which got stuck in floodwaters in the middle of a collapsed bridge.

His body has been deposited at the Komfo Anokye Teaching Hospital morgue.

The incident occurred at an area where six members of a family died last year after floodwaters swept a vehicle they were travelling in.

Authorities have failed to fix the collapsed bridge after the incident despite assurances they gave at that time.

Posterity will applaud you for Free SHS, 1D1F – Kumawu Omanhene to Nana Addo