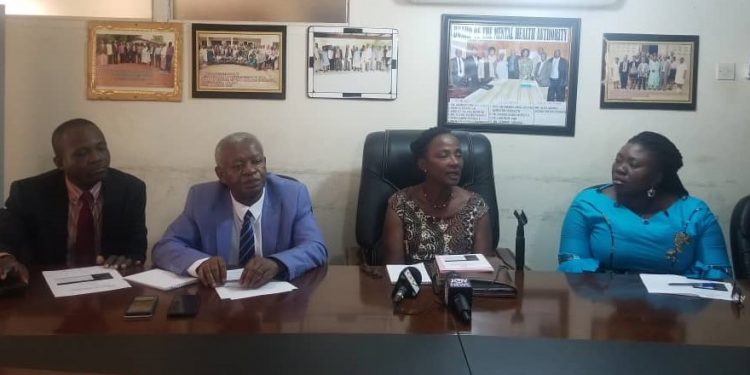 This comes as part of activities to celebrate World Mental Health Day; a day set aside to recognize, promote and create awareness on mental health issues.

Addressing the media on Thursday on the theme ‘Mental Health Promotion and Suicide Prevention’, Chief Executive of the Authority Dr. Akwasi Osei said the authority has sent a petition to Parliament and the Attorney-General on the need to decriminalize that section of the law.

“We have now come to a stage in our national development and with respect to the subject matter under consideration, we need to decriminalize suicidal behaviour. Our Criminal and Offenses Act says attempted suicide is a misdemeanor. Yet attempted suicide is often times a sign of depression or some other form of mental illness and a cry for help.”

“Anyone who attempts suicide is basically saying ‘society please I need help. Come to my rescue’ and instead of rescuing the person, we rather say ‘Go to jail’. We have sent a petition as at now to the Parliament and the Attorney-General. We have sent reminders and hereby reiterate the need to decriminalize it,” he said.

The authority further noted that they hope to receive help and contributions from Ghanaians especially organizations made up of mental health users and their families so that experiences can be shared to help others in similar situations.

Statistics on mental health and suicide

Dr. Akwasi Osei in his address spoke about how rampant the issue of suicide in relation to mental health is in Ghana and around the world.

According to the World Health Organization, the world loses someone to suicide every 40 seconds.

A study by an NGO some five years ago proved that every year, Ghana loses 1500 people through suicide.

60% of people who called the help against suicide line which was tracked for a month were women, with 35% of these people being students. They called with relationship problems, socio-economic problems, and pre-existing mental health challenges.

Calls for decriminalization of suicide

This is not the first time the Mental Health Authority has called for the amendment of the criminal code which punishes suicidal behaviour.

Early part of this year, the Authority made the same appeal after a thirty-five-year-old man was detained for attempting suicide in Parliament.