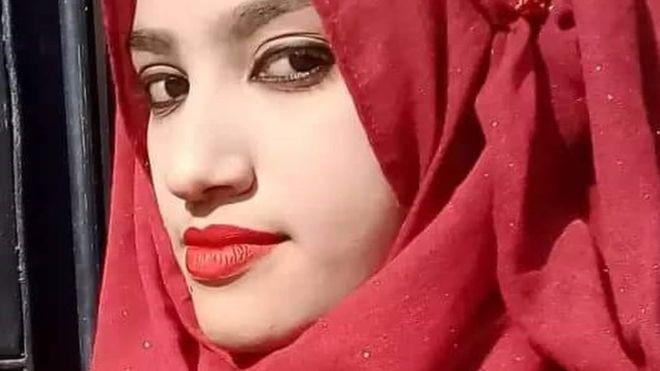 A Bangladesh court has sentenced 16 people to death for the murder of a student for accusing her teacher of sexual harassment.

The headteacher Nusrat had accused of harassment and two female classmates were among those convicted.

Her murder shocked the country and led to a series of protests demanding justice for Nusrat.

The trial has been one of the quickest in a country where such cases usually take years to conclude. Prosecutor Hafez Ahmed told reporters it proved “that nobody will get away with murder in Bangladesh”.

However, the quick conclusion of the case did little to ease her mother’s agony on Thursday.

“I can’t forget her for a moment,” Shirin Akhtar told news agency Reuters through tears upon hearing the verdict. “I still feel the pain that she went through.”

Lawyers for the defendants say they will appeal.

The investigation into Nusrat’s death revealed a conspiracy to silence her which included her own classmates and a number of powerful men from within the community.

Three teachers, including the headmaster, Siraj Ud Doula, who police say ordered the killing from prison after he was arrested under suspicion of harassment, were found guilty by the court on Thursday. Another two of the defendants convicted, Ruhul Amin and Maksud Alam, are local leaders of the ruling Awami League party.

A number of local police were found to have collaborated with those convicted in spreading false information that Nusrat had committed suicide. The officers were not among those tried for Nusrat’s murder.

Nusrat’s family, who supported her decision to go to police back in March, have since been given police protection. Her brother Mahmudul Hasan Noman said they were still in fear for their lives.

“You already know they threatened me in public inside the courtroom,” he told reporters. “I am very afraid. I am urging the prime minister to ensure our security. And the police super should also keep a track on our wellbeing.”

However, the family welcomed the verdict, asking for the sentence to be carried out quickly. In Bangladesh, the death penalty is carried out by hanging.

Anger, tears and a fight for justice

When the judge announced the verdict, some of the defendants burst into tears, while others shouted out across the courtroom that they had been denied justice.

But in Bangladesh, it is more usually women like Nusrat who are denied justice.

Sexual harassment in Bangladesh’s education institutions – including madrassas like the one Nusrat attended – is widespread, while the cost of speaking out is high.

What happened to Nusrat?

She was lured to her school’s rooftop on 6 April this year, 11 days after she reported the headmaster to police for repeatedly touching her inappropriately.

Nusrat was then surrounded by four or five people wearing burqas, pressuring her to withdraw her complaint.

When she refused, they set her on fire.

According to police, they had hoped to make it look like a suicide. Instead, she managed to escape and get help.

But knowing she was badly hurt, she gave a statement which her brother filmed on his phone.

“The teacher touched me, I will fight this crime till my last breath,” she says, naming some of her attackers.

Nusrat, who had sustained burns to 80% of her body, died four days later, on 10 April.

How widespread is sexual abuse in Bangladesh?

Sexual harassment is thought to be relatively commonplace in Bangladesh: a recent report by charity ActionAid earlier this year found 80% of women working in Bangladesh’s garment industry have either seen or experienced sexual violence at work.

Meanwhile, women’s rights group Mahila Parishad said that, in the first six months of 2019, a total of 26 women were killed after being sexually assaulted, 592 were allegedly raped and 113 women said they were gang-raped.

However, these are just the reported figures: there are fears the true number is far higher.

Speaking out like Nusrat is still uncommon as reporting sexual harassment carries risks. Victims often face judgement from their communities, harassment, in-person and online, and in some cases violent attacks. 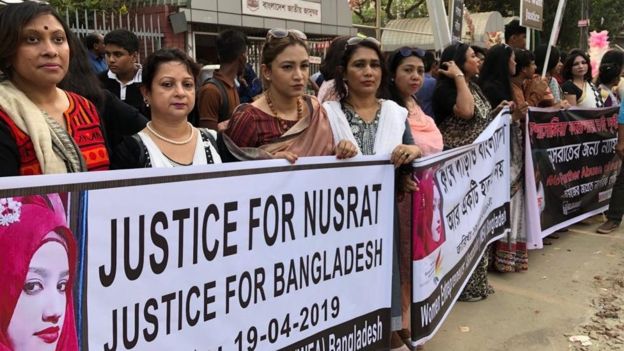 Nusrat was particularly unusual because she went to the police. They filmed her statement on a mobile phone – which was later leaked to the media.

Meanwhile, protesters took to the streets to demand the release of the headmaster, leading her family to fear for her safety.

How did the public react to Nusrat’s murder?

The case sparked mass protests in Bangladesh and shone a spotlight on the vulnerability of victims of sexual assault and harassment in the country.

Prime Minister Sheikh Hasina publicly pledged that “none of the culprits will be spared from legal action”. Her interest in the case was praised by the family.

“We never imagined that justice will be ensured so fast by the prime minister,” Mahmudul Hasan Noman told reporters. “We want to express our gratitude to her directly in person. Hopefully, she will give us a chance to do it. ”

The police initially dismissed the sexual harassment allegations but laid charges against the 16 accused in May. The specially fast-tracked hearing took just 62 days to complete.

Activists say the killing exposed a culture of impunity around sex crimes. Whether more victims of sexual abuse will feel emboldened to come forward following Nusrat’s case remains to be seen.