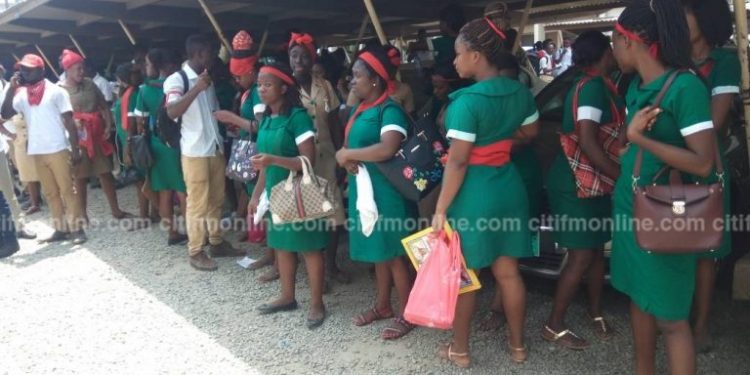 A coalition of rotation nurses and midwives in the Upper West Region has given government up to the end of October 2019 to pay all allowances due its members.

According to the group, the continued delay in paying their allowances since April 2019 is impacting negatively on them as they are no longer able to fulfill their financial obligations.

The Public Relations Officer of the group, Sutan Fabian addressing the media in Wa narrated some of the hardships they have gone through:

“This unfortunate situation of government deliberately refusing to pay our allowances has left most personnel with no option than to be harassed and threatened by landlords to be ejected for non-payment of rents, harassed and humiliated by ward in-charges for not turning up for work on some particular days when they cannot get money to transport themselves to work, working on empty stomachs, among others.”

“The hardship among us is absolutely excruciating and unbearable. What have we done as citizens to be denied our rightful entitlement?” he lamented.

He further outlined some concerns that need to be addressed by government.

“The government should ensure that the agencies responsible for the payment of rotation nurses and midwives are fair and transparent in delivering their duties. The agencies involved in the processes of staff ID generation and biometric verification should speed up the processes. The biometric verification processes should be decentralized to the regional level where members will not have to travel to Accra and other far places for such an exercise. No unexplainable deductions should be made,” he said.

Pressure has been mounted on government on several occasions by various institutions to pay them their delayed allowances and salaries.

According to the group, they have not received the NSS allowance between the months of April and August.

Nurses and other health personnel at the West Gonja Hospital at Damongo in the Savannah Region also embarked on a sit down strike over claims of management failing to come to the negotiation table over their allowances.

The nurses proposed that 10 percent of their basic salary be paid to them as monthly allowances but nothing had been done in that regard.

Another incident was when the Coalition of Allied Health Professionals threatened to boycott various health institutions to demand the payment of their accumulated allowances.