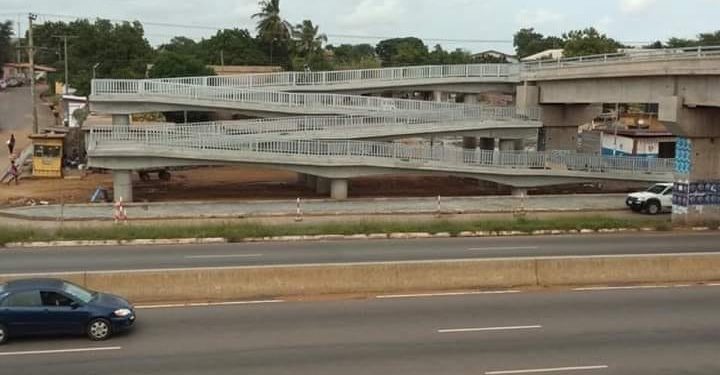 The Motor Traffic and Transport Department (MTTD) at the Madina Police Station has indicated that it will continue to arrest jaywalkers who fail to use the constructed footbridges on the Madina-Adentan highway.

The police said the exercise is necessary following the increasing cases of pedestrian knockdowns.

Two people were reportedly knocked down by vehicles in the last two weeks while they attempted to run across the road facing speeding vehicles.

One person died as a result.

On Wednesday, 110 pedestrians who failed to use the footbridge particularly at Madina-Zongo junction were arrested.

The Madina MTTD Commander, Superintendent Paul Wesley Baah said his outfit will ensure that the right thing is done.

“It is not going to be one time. We will continue to do this exercise so far as there are still people who want to be recalcitrant and don’t want to use the provided footbridges,” he said.

Meanwhile, the arrested persons from Wednesday’s exercise have been granted bail but the police say they will be processed for court.

“We will take them to court. If they have any explanation, they will say it in court,” SP Baah told host of Eyewitness News, Umaru Sanda Amadu.

Authorities have complained about the low patronage of the footbridges despite an earlier national uproar over the lack of such facility on the Madina-Adentan stretch.

All the six footbridges, located at Firestone, Madina-Zongo Junction, Redco Junction, Ritz Junction, SDA Junction, and WASS had until recently been left uncompleted and unusable.

But after the footbridges were completed, there were complaints that the bridges were too long and caused serious inconvenience due to the length.