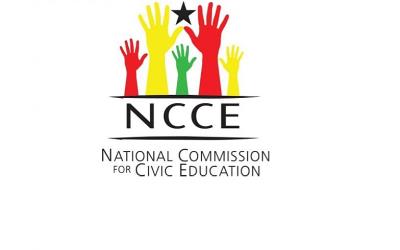 The National Commission for Civic Education (NCCE) has expressed regret over some “misinformation” in the media alleging that the upcoming December 17 national referendum is to elect Metropolitan Municipal District Chief Executives.

The Commission clarified that the referendum is only to vote on the proposed amendment to allow political parties to participate in the District Level Elections.

“The Commission wishes to clarify that the 2019 National Referendum is to enable citizens to vote on the proposed amendment of Article 55(3) of the 1992 Constitution that currently bars political parties from participating in District Level Elections (DLEs), the proposed amendment is to introduce multi-party participation in the Local Government System in Ghana,” NCCE said in a statement.

It said the false information might cause confusion on the day of the election and urged the media to help educate the public correctly.

Article 55(3) states that: “…Subject to the provisions of this Article, a political party is free to participate in shaping the political will of the people, to disseminate information on political ideas, social and economic programmes of a national character, and sponsor candidates for elections to any public office other than to District Assemblies or lower local government units”.

NCCE explained that that provision in the constitution could only be amended through a referendum where at least 40%of persons entitled to vote, vote at the referendum and at least 75% of the persons who vote cast their votes in favour of passing the bill.

As issued by Electoral Commission (EC), the Referendum question will appear on the ballot paper as: Are you in favour of the Bill to amend Clause 3 of Article 55 of the 1992 Constitution to allow Political Parties to sponsor Candidates for election to District Assemblies or Lower Local Government Units”? The electorate may vote YES (colour coded Yellow) or NO (colour coded Dark Brown).

The amendment of Article 243 (1), a non-entrenched provision does not require a referendum. It states that: “…There shall be a District Chief Executive for every district who shall be appointed by the President with the prior approval of not less than two-thirds majority of members of the Assembly present and voting at the meeting…”Parliament is currently in the process of amending this article to enable eligible citizens to elect their MMDCEs.

A successful amendment of Article 55(3) implies that political parties would be able to sponsor candidates for election to District Assemblies or Lower Local Government Units.

The outcome of the National Referendum will have either of the following outcomes: If the electorate votes YES, the election of MMDCEs, Assembly and Unit Committee Members in the near future will be on a partisan basis.

If they vote NO, then the election of these candidates for the local level elections will be on a non-partisan basis as being practiced now.