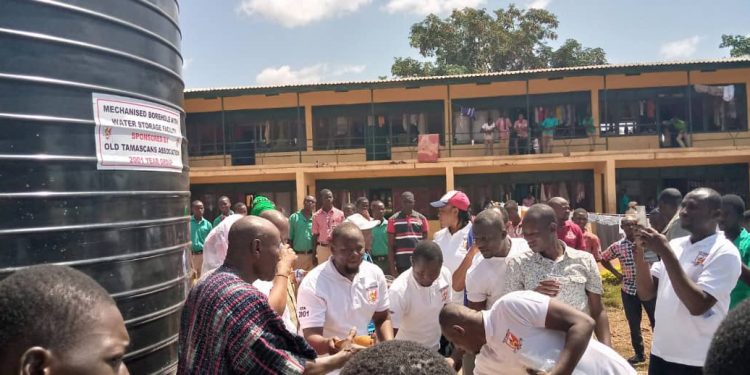 The 2001 year group of the Old Tamascans Association has provided the school with a mechanized borehole and a water storage facility as a way of giving back to their alma mater.

At the commissioning ceremony, the chairman for the year group, Mr Adama Muntala said the gesture is to support and show appreciation for what they have been able to achieve after going through the school.

‘’After 18 years of leaving the school, we came together three years ago to form this group. We decided to look at the issues facing the school so we can offer some support and contribute our bit to the success of the school.  The training we got and the motivation has made us what we are. So if we have something small to start and part with, why not.  The school has a lot of issues and government alone has so much commitments and would not be in a position to fulfil all the infrastructure deficits and whatever we need as kids,’’ he told Citi News.

‘’Our motivation is that, 18 years ago when we were here, water was a major problem. We used to go as far as  Tamale Technical University, then T-Poly and then UDS central administration to get water. Sometimes we go like two, three times because you have a senior and yourself. We used to spend most of our precious time searching for water. So, the water situation is a problem even when we were here and we suffered a lot. So, we thought that since water affects every activity that is done on campus and as a matter of fact it’s what makes all of us live, we will give them water for now even though we will be looking at other areas we can venture,” he added.

Mr Adama also stated that, for the school to remain relevant, there was the need for old students to be at the center and play a key role in achieving excellence.

He therefore urged other year groups of the school who are yet to identify themselves with a project or provide any form of support to emulate their example as the feeling of giving back is always great and refreshing.

He encouraged the beneficiaries of the project to take good care of it for their benefits and many more to come to avoid early breakdown of the facility and cultivate good maintenance culture.

On his part, the Headmaster of the Tamale Senior High School, Mr Wilberforce Salifu Issah commended the group for the support and assured them of good maintenance.

He said the project could not have come at a better time than now, as the student population of the school keeps growing.

Some of the students who could not hide their joy, thanked their seniors for the project and said it would go a long way to assist them. They said they will now have enough time for their studies as the project now limits the long hours they usually spent in search for water.

The project which was estimated at a cost of GHC 21,521.00 will supply water to three water storage facilities that would serve three student houses and six masters bungalows. There are also plans of extending it to the kitchen.