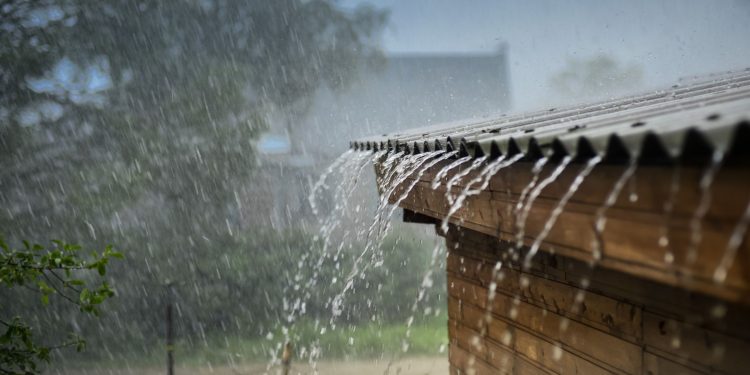 When does the dry season usually arrive?

The definition of what the dry season is can vary, but let’s say, for the purposes of this article, that the dry season arrives when the cumulative rainfall curve over the year for each location (the accumulated rain over the whole year) starts to hit a plateau.

The green line in the image below shows the average yearly rainfall accumulation of the last 35 years and the orange arrow indicates that, for the city of Kumasi, for example, the dry season would hit around the middle of November.

Looking at other regions to the north, we would see that the rains would, on average cease to fall earlier.

It is clear from the mean rainfall in October, that while there still are larger amounts of rainfall in the Southern parts of the West African countries (mainly in Nigeria), there is a trend where we would see rains start to cease in southern parts of Niger and decrease in the north of Nigeria.

Looking at the average for November, where a huge difference in rainfall spread is observed (compared to October), it shows that November can usually be considered as the first month where no rainfall at all is observed in the northern parts of West Africa.

In conclusion, November is the first real dry season month for large portions of West Africa, and in northern parts of West Africa it may even arrive even earlier while the south might have to wait until the middle of November or even until December for the dry season to kick in.

There is a large variation between years, and very seldom the average (green line) is completely aligned with what is observed. So what happened in 2019? Is it really an exception and why do we have the impression that it rained a lot too late in the season?

To understand the difference this year, let’s take a look at 3 snapshots of 3 cities in Ghana (Tamale, Kumasi and Accra) which display rainfall accumulation over the year (35 year average, 2019 so far, and extremes of both dry and wet) 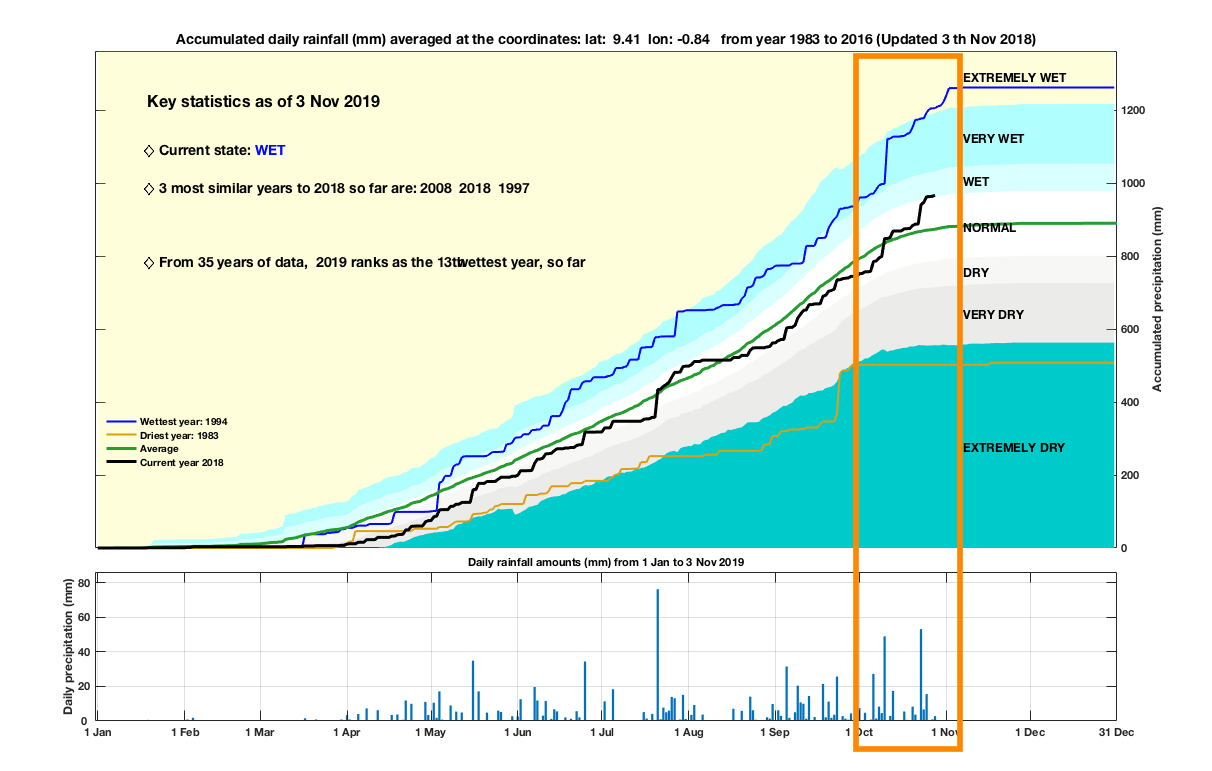 It can be observed that this year (black line) the rain in Tamale was slightly under the average(green line) until the end of September, and as at the end of October 2019, it is now classified as wet, which means there was an above average rainfall during the month of October.

As we travel more into the south the effect of a really rainy October month is even more apparent. Looking at diagrams for Kumasi and Accra, it is observed that Kumasi is classified as very wet and, Accra as Extremely wet. Both cities even rank as the 2nd wettest year of the last 35. 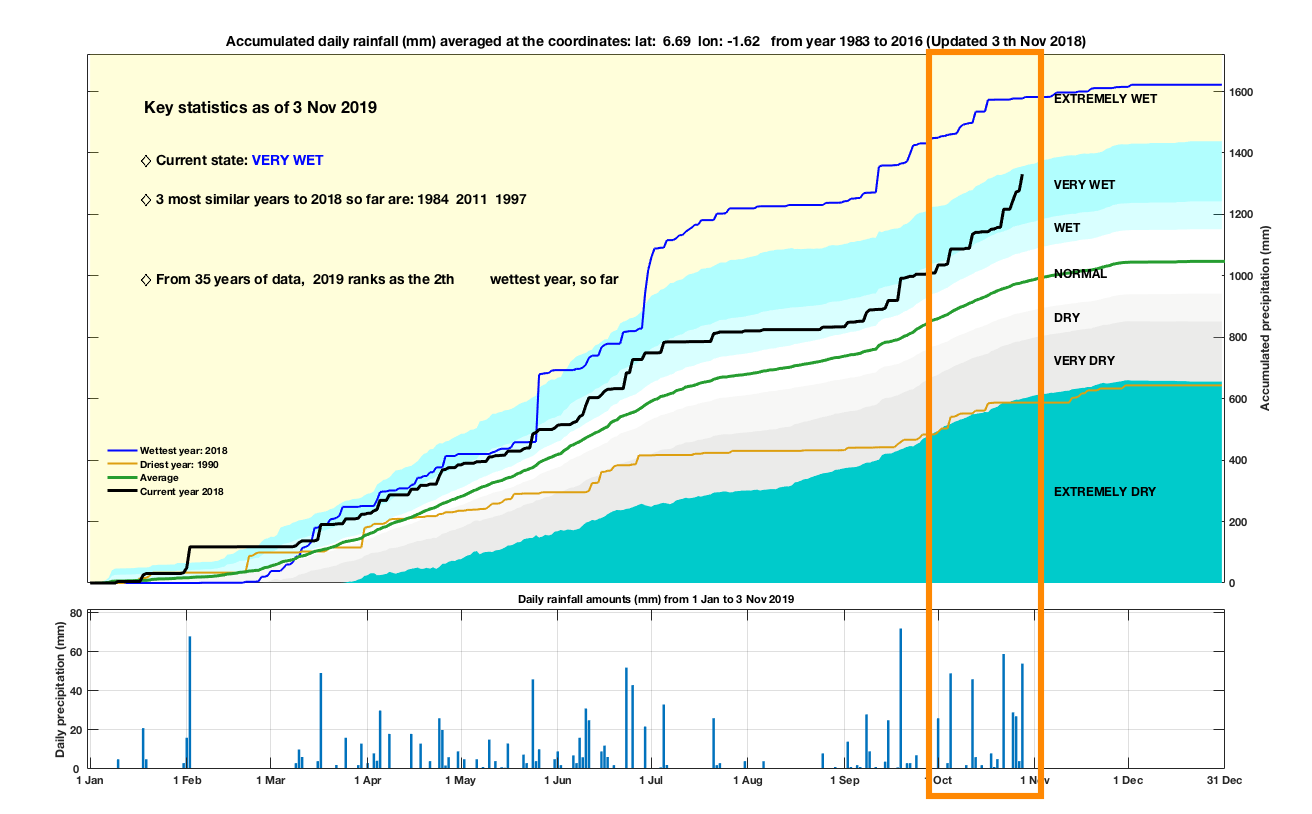 In both cases (Kumasi and Accra), 2019 was already well above the average (especially Accra) but October was a very big boost, with Accra having a really large rain event in October, classifying it as extremely wet. In fact, on the 28th of October, nearly 115 mm of rain fell in East Legon in a little more than two hours. This is almost 15% of the annual rainfall – in just two hours! 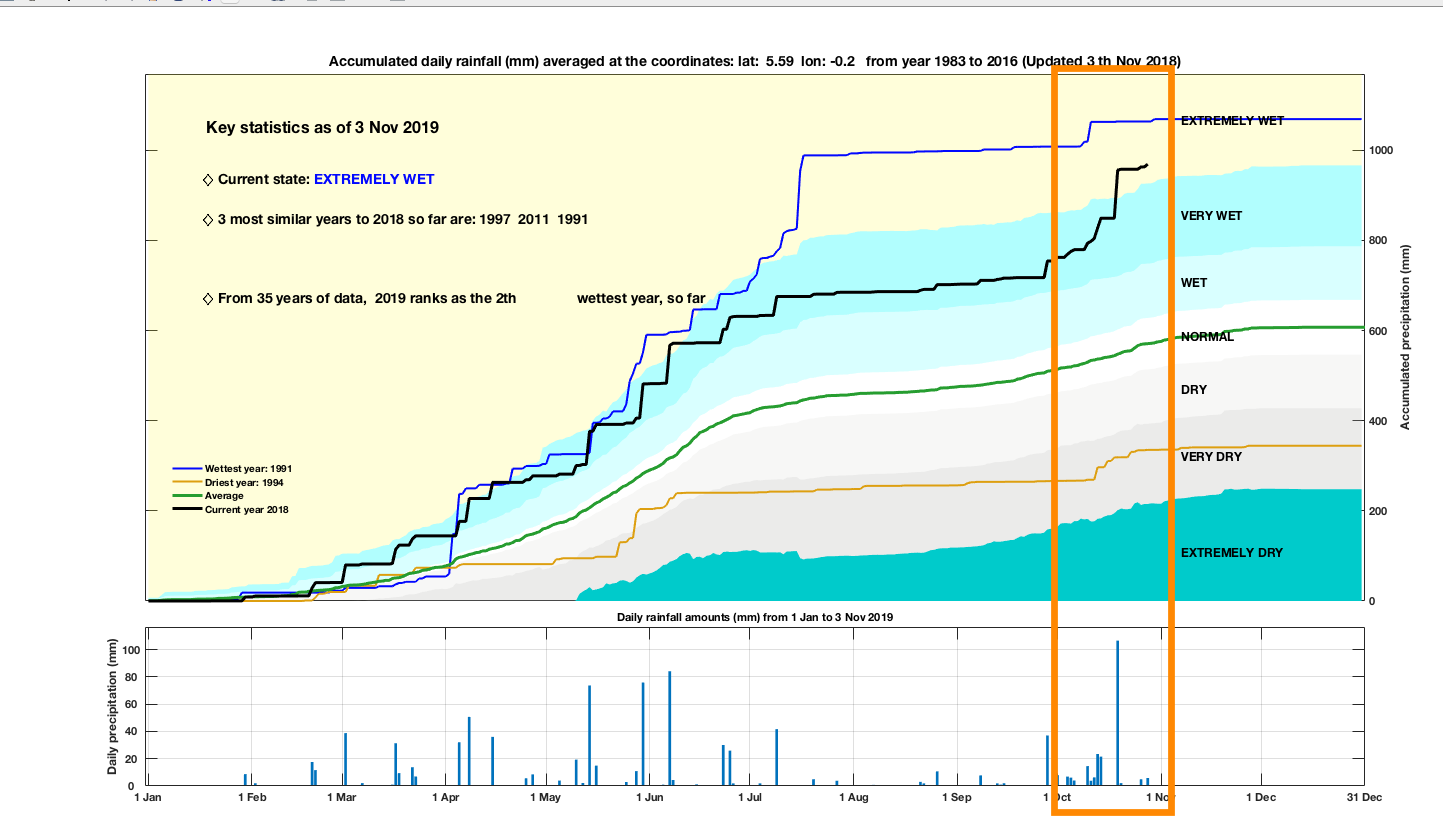 While it is not unheard of to have rainy October months, 2019 had rather large amounts during this month, especially in the south of the West African Countries as can be seen in the image below.

So when people say that there was a lot of rain late in the season, they are both right and wrong. Right because October was in fact much rainier than average, but wrong because October (mainly in the south of the various countries) is still one of the wet months, and therefore not that late.

What may have caused these extreme rainfalls?

Now the answer to the question, “What may have caused these extreme rainfalls in October”? In Accra for example, there was some very localized (heavy rain in one place but much less at another place very geographically nearby) rain events, and this is a normal behavior when thunderstorms bring rain due to a process known as convection. Convection is essentially rising air resulting in cloud formation and rainfall. This process is very local in nature and it can be quite stochastic meaning that rainfall can have a quite random distribution with large local variations.

However, looking at the bigger picture, what may have been responsible for the spread of rainfall during October might have been a phenomena called MJO or Madden-Julian Oscillation which is a fluctuation in tropical weather that returns every 30-60 days. It is characterized by a traveling pattern propagating eastwards, and manifests itself by anomalous increased intensity and frequency in rainfalls, when its peak phase is affecting a region. In a similar manner it also decreases rainfall when the opposite to its peak occurs in a region.

The image below shows the location of the phase of MJO during last month and a prediction for the next month.

It is observed that majority of the month of October had a phase of this wave pattern mostly over the western hemisphere and Africa which may explain the above average rainfalls in the area.

Moving forward into November, the active phase of the MJO has moved to the Indian Ocean and will be around the Western Pacific for the next weeks. We can also see that the start of November has already had a huge decrease in rainfalls into West Africa, and it is expected that the peak phase of MJO will continue in the Western Pacific contributing to a drier month of November in much of West Africa, which aligns with what we normally expect in West Africa, where the Harmattan has already started affecting several countries, albeit weak for now.