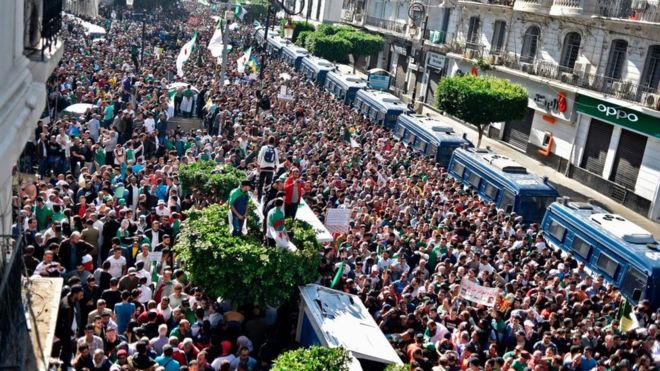 Authorities in Algiers shut its metro and all trains to the capital in an effort to keep protesters away, but many arrived by coach

Tens of thousands of demonstrators have converged on the streets of Algiers as Algeria marked the 65th anniversary of its war of independence from France.

Protesters are demanding a “new revolution” and oppose the government’s proposed election next month.

Demonstrations in the capital on Friday were some of the largest since protests began in February.

But his departure was not enough for the predominantly young protesters who have taken to the streets for 37 consecutive Fridays.

They are calling for sweeping government reforms, accusing leaders of widespread corruption and state repression.

Protesters do not want an election next month – they argue it would not be transparent or fair under the current political system.