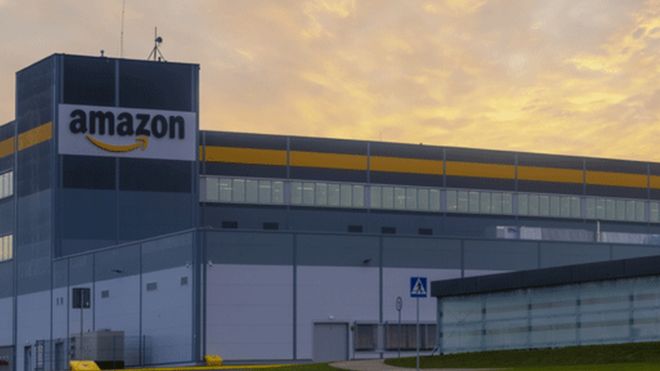 Amazon orders are pouring into warehouses around the world as people rush to buy Christmas gifts and take advantage of Black Friday deals.

But for those fulfilling these orders, peak season – as workers call the run-up to Christmas – is not especially festive.

It means long hours, hard work and for some, difficult decisions.

One young woman working at an Amazon warehouse in the US describes driving hundreds of miles to drop her child with his father for the whole Christmas period. Her schedule means she cannot look after him.

She posted a picture of herself and her child in their car on a Facebook group.

The BBC gained access to the group, which has 20,000 members and is a place where workers discuss their jobs, lives and working conditions.

Amazon insists that it pays industry-leading wages and that working conditions in its warehouses are very good.

Jeff Bezos, chief executive and one of the world’s richest men, has resisted calls for unionization.

The Facebook group paints a complex picture of the firm.

Lots of people say they are worried about being fired.

Some (but not many) of the group appear to enjoy their jobs; lots of people make light of their daily routines with black humour, memes, and videos. Sometimes they share good news about promotions or bosses spontaneously buying them pizza.

One has posted a live video of recent protests at a Staten Island warehouse alleging poor working conditions.

The first comment below it reads: “They will take names and six months from now none of those people protesting will be working there anymore.”

Others point out that there did not seem to be much of a crowd, with some saying that while they agreed with the sentiment, it was “stupid” to protest.

Amazon told the BBC: “Fewer than five Amazon associates participated in the event outside the Staten Island fulfilment centre. It was obvious to the 4,500 full-time workforce that an outside organization used our building and the upcoming retail holidays to raise its own visibility and spread misinformation.

“The fact is that Amazon provides a safe, quality work environment in which associates are the heart and soul of the customer experience, and the notable lack of Amazon employee participation shows that associates know this to be true.”

‘No more than five deaths’

One woman on bereavement leave is concerned that she won’t have a job when she returns because she is not sure how many times she is allowed to “be off” for family funerals. She seeks advice on the group.

“No more than five deaths” replies one.

Amazon responded: “Employees have time-off options they can choose to use if they would like.”

Another person on the group alleges that they earned just $20 (£15.50) for working an extra day while having $198 deducted for one sick day.

And another describes a car accident she had on the way to work.

After treatment in hospital, she called in to work to show her discharge papers to “prove” to HR that she has good reason for not being at work.

Even though the doctor prescribed bed rest for two-to-four days, the woman says she was advised she needed to return to her manager and start her shift, four hours into it. Not doing so will mean she falls into negative PTO/UPT (paid time off/unpaid time off).

The woman pointed out she couldn’t lift any objects and was on a lot of medication. She does the sensible thing and goes home. The next day she alleges she was fired.

Amazon said it could not comment on specific cases without names and the BBC has decided not to reveal the identities of those in the group.

The woman’s post receives a mixed response. One worker tells her she needs to start a lawsuit, saying that her bosses had agreed a settlement after she took them to court.

But another says she shouldn’t have used up all her UPT, as that is what it is for.

What no-one says is that she should take her case to a union.

On a recent visit to a fulfilment centre at Manchester Airport, I asked general manager Neil Travis why the firm was so against unionization.

“We have a forum that represents people within our building. We’d rather just have direct conversations with the people that work here, and that has been fairly well-received and respected by our teams.”

The UK’s GMB union said of Mr Travis’s response: “Amazon bosses are burying their heads in the sand if they don’t think they have a problem. Conditions are appalling.

“Their forum is clearly not fit for purpose. Amazon needs to get round the table with GMB and discuss ways to make their workplaces safer and to give their workers an independent voice.”

Amazon hit back, describing the union as “self-interested critics with a vested interest in spreading misinformation about Amazon”.

“The truth is that Amazon already offers industry-leading pay, comprehensive benefits, as well as a safe, modern work environment.”

A Freedom of Information request, sent to the UK’s Health and Safety Executive by the union and shared with the BBC, suggested that reports of serious incidents at the Manchester Airport site had doubled over the past three years, from 10 in 2016/17 to 22 in 2018/19.

The reports include cases of workers fracturing bones, another suffering concussion, falls and a collision with heavy equipment.

For injuries to be reported to the UK’s Health and Safety Executive under Riddor (Reporting of Injuries, Diseases, and Dangerous Occurrences Regulation) they must be:

Meanwhile, evidence is mounting in the US that working conditions could be improved.

The New York Committee for Occupational Safety and Health Administration said in its recent report, Time Off Task, that employees at the Staten Island distribution centre were encouraged to work faster and limit breaks, causing physical pain in 66% of the 145 workers surveyed.

Amazon dismissed the survey as “biased”, saying only a fraction of workers were questioned.

But an exclusive report from tech website Gizmodo suggested that Amazon’s own figures submitted to the OSHA revealed “staggering” injury rates at the warehouse.

According to one lawyer, they are higher than the national warehouse average and industries known to be dangerous, such as waste collection and policing.

In response, Amazon told the BBC a “snapshot of injury recordings” was misleading, adding that it invested heavily in safety.

“Safety training is constant, both in making sure employees know how best to work with the technology in the facility and also how to prevent injuries.

“There’s a dramatic level of under-recording of safety incidents across the industry. We recognized this in 2016 and began to take an aggressive stance on recording injuries, no matter how big or small, which can result in elevated recordable rates and makes comparisons difficult.”

Last month a worker died in an Amazon warehouse in Ohio. Although Billy Foister had a previous heart condition, and there is no suggestion his death was caused by working there, it is claimed his collapse went unnoticed at first, with co-workers told to go back to work.

On the Facebook group seen by the BBC, people claiming to have worked alongside him say that he had visited the warehouse’s medical clinic the week before, complaining of chest pains, but was not given any time off.

Amazon said it was “deeply saddened by the loss of one of our associates”.

“Several trained and certified Amazon team members responded within three minutes to administer CPR and the AED (defibrillator) and did all they could to support him until local EMS (emergency medical services) arrived, within 10 minutes, to transport him to the hospital for further treatment.”

On the wall of the Manchester Airport fulfilment centre is a worker bee – a symbol of Manchester since the 1800s, when the city was full of textile mills, commonly described as hives of activity, with the workers the “bees”.

Amazon’s fulfilment centres are the digital age’s equivalent and working conditions are undoubtedly a vast improvement on the mills of old.

It is far less frenetic than I expected. There are not hundreds of people hunched over workstations – in fact, there are far more robots than people on the floor I visited.

General manager Mr. Travis points out that the company runs public tours, with members of the public and schoolchildren invited to see conditions for themselves.