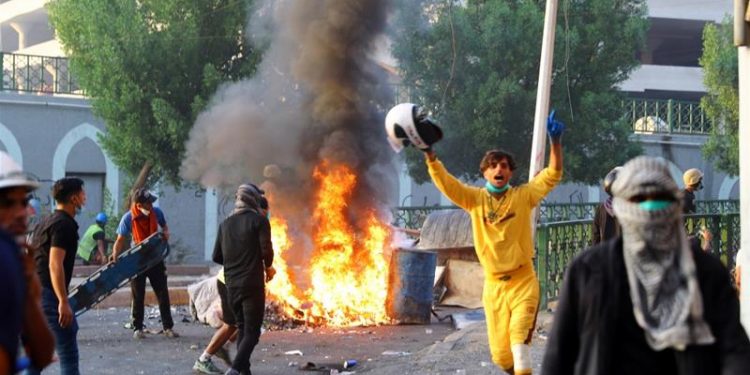 The death toll during demonstrations in Iraq surged to more than 300 as security forces were accused of “relentlessly” targeting protesters.

Six more people were killed in the capital Baghdad on Sunday and dozens of others hurt in clashes.

The head of the Iraqi parliament’s human rights commission told Al Jazeera that 319 people have died since October 1 with more than 15,000 wounded. Most of the casualties were anti-government protesters, but security officers also died in the violence.

Iraqi security forces in Baghdad fired tear gas at demonstrators and erected concrete barriers in a bid to block their movement.

Iraqi medical workers who have treated the wounded say they’re being attacked by security members along with the protesters.

“They’re targeting us to prevent the treatment of the injured,” Dr Mustafa Fawzi told Al Jazeera.

“Two days ago on a bridge they were chasing us. We were hiding on side streets and they were shooting at us from Humvees. Who they are and who they get their orders from, we don’t know.”

A medical source said about 30 people were wounded in the al-Khulani area on Sunday, while volunteer medic Azhar Qassem said doctors would stay put in Tahrir Square to treat any wounded. “We won’t pull out,” he insisted.

Military spokesman Abdul Kareem Khalef denied that the gunmen were part of the legitmate security forces.

“They are not anti-riot police, they are not part of our forces. They’re civilians, or militias, we don’t know. We’ve started an investigation to track them,” he said.

According to the United Nations Assistance Mission for Iraq, six protesters or volunteers providing assistance in the Baghdad demonstrations have been abducted by unknown assailants.

One of them, 36-year-old volunteer and activist Saba al-Mahdawi, had been providing medical supplies in Tahrir Square on November 2 when she was taken on her way home from the protests. Her fate remains unknown.

‘Lethal force’
In a statement late on Saturday, Amnesty International described the situation in Iraq as a “bloodbath” and called on the government to rein in security forces.

“The government of Iraq has a duty to protect its people’s right to life, as well as to gather and express their views. This bloodbath must stop now, and those responsible for it must be brought to justice,” Heba Morayef, Amnesty’s Middle East and North Africa director, said.

“Iraqi authorities must immediately order an end to this relentless, unlawful use of lethal force.”

The crackdown began on Saturday when security forces tried to wrest back control of three bridges spanning the River Tigris in the heart of Baghdad. 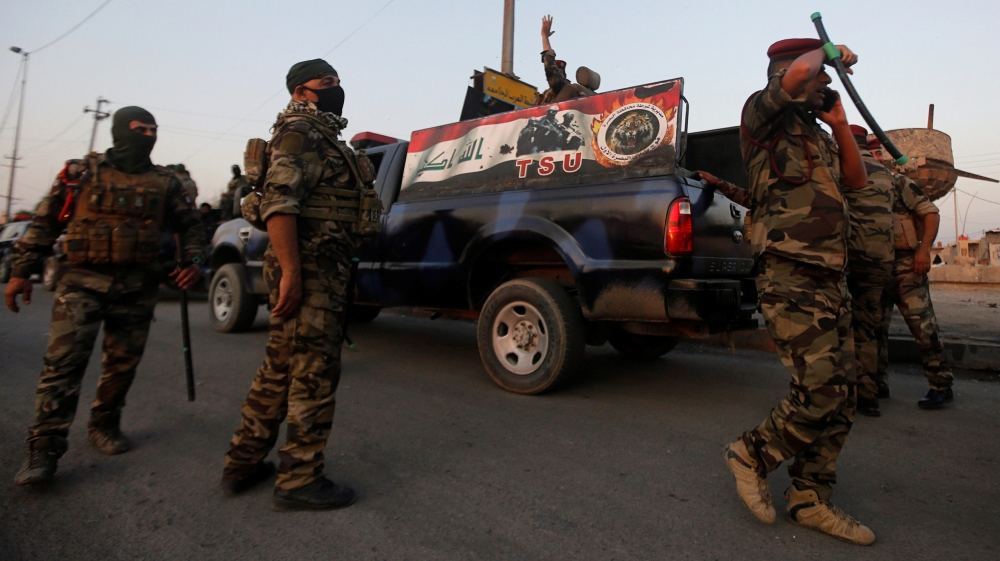 Iraqi forces then moved towards Tahrir Square, the hub for the weeks-long protest movement, firing live rounds and tear gas.

Medics who witnessed the police operation in Baghdad told Amnesty that four protesters had been shot dead with live ammunition, while two others succumbed to wounds resulting from tear gas grenades striking their heads.

Amnesty said there have been at least 264 protester deaths across the country in little over a month, while other tallies, including one compiled by AFP news agency, put the death toll to around 300.

On Sunday, clashes on Baghdad’s al-Khulani roundabout in Baghdad resumed with security forces firing tear gas at protesters. Employees based in the area were told to leave.

Security forces were also reported closing roads in the area with concrete barriers, trying to block protesters from reaching Tahrir Square and the Sanak bridge.

“Witnesses [said] that there are renewed clashes going on in an area on and around Sanak bridge, one of the bridges that leads from the area close to Tahrir Square to other heavily-fortified pars of Baghdad,” Al Jazeera’s Mohammed Jamjoom, reporting from Baghdad, said.

“Tension … is rising and people are concerned there could be more clashes throughout the day,” he added, noting that there were also reports of protests and clashes in the cities of Basra and Najaf.

In the southern city of Nasiriyah, security and medical officials said 31 people were wounded in confrontations outside the education directorate as security forces tear-gassed protesters trying to block employees from reaching the building in the city centre, according to The Associated Press. Among those wounded were two school students, they said, speaking on condition of anonymity in line with regulations.

Since October 1, Iraqis have been pouring onto the streets to protest against corruption and the government’s failure to deliver basic services and economic opportunities.

The protesters’ demands have since widened to include the resignation of the government and a complete overhaul of the country’s political system, which was established after a US-led invasion that critics say has allowed certain individuals and groups to enrich themselves and expand their influence.