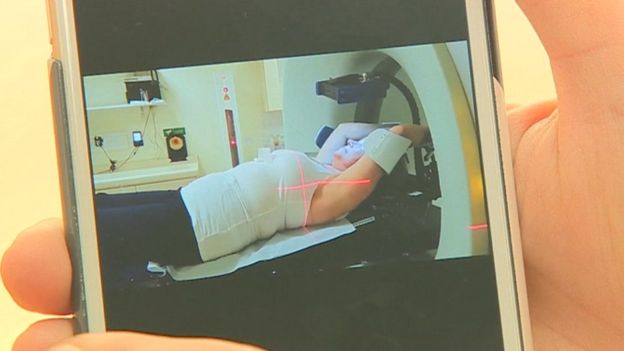 A mobile app designed by a patient is helping people with breast cancer prepare for the start of radiotherapy.

The treatment requires them to raise their arm above their head, but patients often find that difficult or painful after breast surgery.

Exercises are important but Karen Bonham said leaflets giving details did not help her enough.

So she helped create the app to offer exercise videos – and medics say it is helping more women be ready on time.

Staff at Velindre Cancer Centre in Cardiff say they have noticed fewer patients needing urgent referrals for physiotherapy ahead of the treatment since the “Breast Axilla Postoperative Support app”, or BAPS App, was launched in February.

Ms. Bonham said she had been “very anxious” about not being able to access radiotherapy and had confided in her physiotherapist.

She said the paper-based exercises were “not the most informative” and asked what could be done about it.

“I’m just delighted that she listened and spoke to the full breast care team, including the surgeon, to be able to produce something that is now much more easily accessible and best practice for everybody,” Ms. Bonham added.

Kate Baker, a clinical lead physiotherapist at Velindre, who helped devise the app, said: “Previously, we’ve always handed out information on exercises in a leaflet, that patients would be given by a physiotherapist and taken home. But often these pieces of paper get lost and they’re not followed through.

“What we wanted to do was provide exercises, physical activity advice and further information in an app format, which would allow individuals to have it with them at all times.”

Donna Egbeare, breast surgeon at Cardiff and Vale University Health Board, who was also involved in developing the bilingual app, said the impact of being able to start radiotherapy on schedule was significant.

“If you get to the point of radiotherapy and then you can’t have it, emotionally that’s a massively difficult thing to deal with,” she said.

Why is the arm position important?

Heather Cootes, a radiographer at Velindre, said: “We’re looking at millimetres of tolerance with our treatment. Everything is planned on that first scan we do, and then the treatment is given based on that plan and that patient position.

“So if a patient is coming to us and they’ve got problems with arm movement…. that can cause problems further down the line because, as time goes on, they’ll relax between the planning scan and treatment and that can mean the position has changed slightly.

“So we may need to then re-scan and re-plan the treatment and that can prolong and delay things for the patients.”

How is the BAPS App helping?

“They’re a lot more prepared and less anxious when they’re coming to us for planning.”

Ms. Bonham, from Radyr, is still receiving cancer treatment but is back in work.

“It is great to think that my role as a patient has been able to produce something like this,” she said.

“It helps tremendously recover your confidence and the sense of control so that you can play a part in your self-management, because being a patient is emotionally very difficult, so this has been extremely helpful in recovery.”

The team now hopes to roll the app out across Wales to allow more patients to benefit from it.