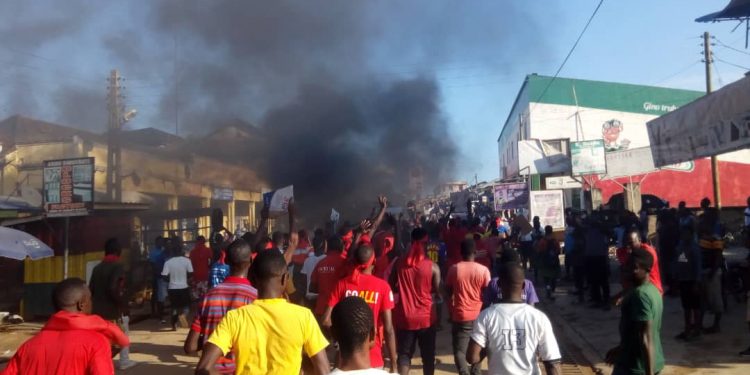 The District Chief Executive (DCE) for Gomoa Central in the Central Region, Benjamin Kojo Otoo, says the Swedru District Magistrate court will later today decide the fate of the 32 drivers who were arrested at Agona Swedru for mounting roadblocks during a recent demonstration over bad roads.

Speaking to Citi News after a meet the press series at Gomoa Aboso, the DCE said some persons who sought to score political points incited some of the drivers who went overboard.

“It is rather unfortunate that it had to happen this way. We had a lot of discussions with the Regional Commander and the Judiciary. So I believe by Wednesday, they will go back to court and a decision will be taken. We are appealing to anyone who has been affected by the actions of the youth to forgive them.”

The drivers were arrested after they protested the bad state of their roads.

The demonstrators blocked the access roads making it difficult for pedestrians to cross the stretch that connects Swedru and Winneba through to Bawjiase.

Clad in all red attire, they chanted war songs to decry the neglect of the roads by successive governments.

The protestors who were expected to present a petition to the Regional Coordinating Council could not do so because the police arrested some of their members describing the protest as illegal.

At the time, the National Democratic Congress in the area gave the government a 24-hour ultimatum to release the drivers because the arrest, according to the party, was unfair.