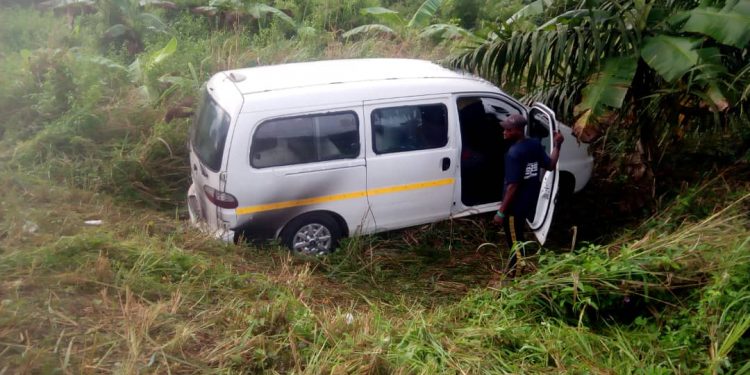 A trotro driver has lost his life while the driver’s mate escaped narrowly after highway robbers shot at them at Ekumfi Esakyir in the Central Region.

The driver, 40-year-old Kojo Arhin, was shot in the head after failing to stop for the robbers.

Speaking to Citi News in an interview, the driver’s mate, Kwesi Badu narrated that they were heading to Accra from Breman Essiam but upon reaching Essakyir Secondary School junction, they were attacked.

“We were headed to Accra from Essiam but upon reaching Essakyir junction, we saw a flash of light then suddenly I realized it was highway robbers instead of the Police so my master quickly decided to turn away but it was too late because the robbers fired at him,” Kwesi Badu said.

“For me upon sensing danger, I jumped from the car and entered the bush so all I heard was gunshots but my master ( driver) couldn’t make it.”

Some passengers who spoke to Citi News said they were frightened and had to succumb to the robbers who searched them and took their personal belongings.

“After taking over the car the robbers asked how much I had on me and I told them I had 60 cedis but one of them slapped me and searched me further and took 300 cedis from my back pocket,” one passenger lamented.

Some commercial drivers at Ekumfi later took to the bush where the incident happened in search of the robbers but yielded no result.

“We have been tormented by these high way robbers for years and the Police administration in the region have done nothing about the situation,” one driver added.