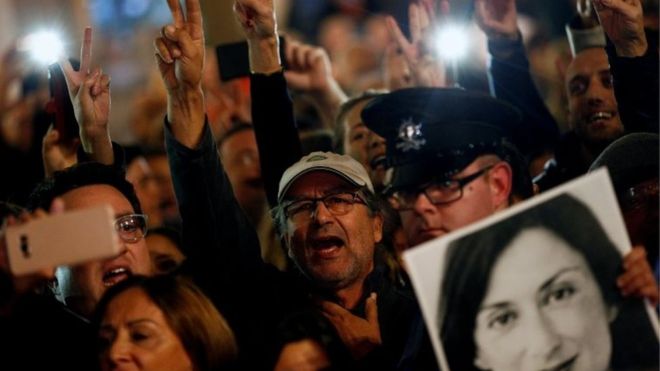 Malta’s Prime Minister Joseph Muscat has said a suspect in the murder of journalist Daphne Caruana Galizia will not be granted immunity to reveal what he knows about the case.

Businessman Yorgen Fenech had requested a presidential pardon in exchange for information.

Caruana Galizia, a prominent anti-corruption blogger, was killed by a car bomb in 2017.

Mr. Muscat is under increasing pressure to resign over the case.

Last week Mr. Fenech was arrested in a dramatic raid on his yacht. He received hospital treatment after his arrest and has been given police bail.

Caruana Galizia had alleged that a company called 17 Black, which Mr. Fenech owns, had links to high-level politicians.

What did the cabinet decide overnight?

The prime minister said it was the most appropriate course as Mr. Fenech had made allegations against the PM’s former chief of staff Keith Schembri – who resigned last week and was arrested on Tuesday.

“I left the final decision with my colleagues, who decided that it’s not fitting to grant a pardon,” Mr. Muscat announced at a press conference, flanked by ministers.

He stressed that his cabinet had followed the advice of the chief of police and the attorney general.

Police confirmed on Thursday that Mr. Schembri had been released and was no longer of interest to investigators.

The prime minister also reiterated his promise to resign only when those who ordered the killing had been identified.

“I have made a very firm commitment that I want this case to be closed under my watch. I think the authorities have already delivered what many thought could not be delivered, which is major breakthroughs in the investigation. My job is to see this investigation concluded,” he said.

Angry protesters gathered outside the government palace in the early hours of Friday morning. One of Caruana Galizia’s sons threw fruit at the car of a government minister and shouted insults, the Reuters news agency reports.

Why have events come to a head?

Investigations into Caruana Galizia’s murder in a car bombing intensified when a suspected middleman was pardoned on Monday.

The prime minister told parliament the suspect, Melvin Theuma, was being given immunity in return for information about the killing. Maltese reports suggested he had audio recordings linked to the case.

Mr. Schembri was previously named in the Panama Papers. Caruana Galizia alleged that he and Mr. Mizzi had benefited from secretive “shell companies”.

The Economy Minister, Chris Cardona, took the decision to suspend himself on Tuesday.

What do we know about the murder inquiry?

Three men – brothers Alfred and George Degiorgio and their friend Vincent Muscat, all in their 50s – have been charged with triggering the car bomb which killed Caruana Galizia near her home in October 2017. They were arrested in December 2017 and pleaded not guilty in pre-trial proceedings.

Mr. Muscat told police the bomb had been placed in Caruana Galizia’s car while it was parked outside the walled compound where she lived. The killings earned the trio 150,000 euros (£132,000), Reuters news agency reports.

Police have continued to investigate in the hope of finding out who ordered the killing.

The late journalist’s sister, Corinne Vella, told the BBC it was time the truth came out.

“We’re finally starting to see some progress in the investigation into Daphne’s murder,” she said.

“It’s welcome, it’s important, but it’s very far long overdue. To us, Daphne’s death has always been linked to her work, and we’ve maintained all along that justice for Daphne means justice for her murder, but also justice for all her stories, because to us they were connected.”

‘A lot of thinking’ went into introduction of higher denominations – BoG