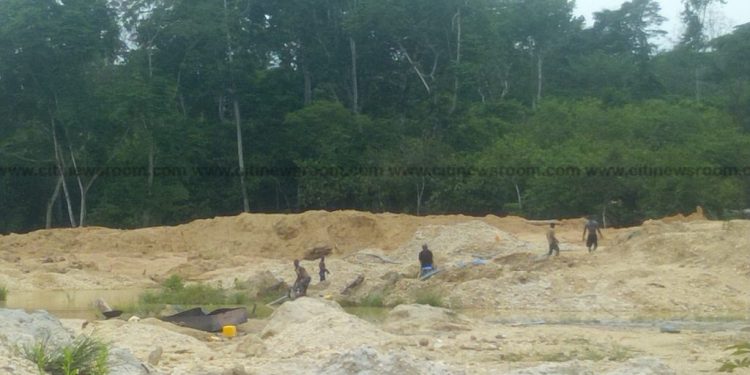 The Operation Vanguard contingent in the Eastern Region has arrested 31 foreign illegal miners in the Kwahu West Municipality.

This follows reports that about 1,000 foreign nationals had connived with cocoa farmers and landowners in the area to mine illegally.

The officer in charge of the Operation Vanguard team in the area, Major John Majeed Baluo said although some arrests have been made, the team is faced with many challenges in their operations.

“So far we’ve been able to arrest 31 of them. The operation is still ongoing and so far the areas that we’ve conducted such operations are Abekoase, Abomosu, Bomso, and Akrade. These were conducted just last week.”

“There are some observations that we’ve made over the period. The first one is the loyalty of the locals towards these illegal miners. It will surprise you to know that before we even move and get to the site, our own people will call and tell them that the Vanguard personnel are on their way coming,” he said.

Meanwhile, the Eastern Regional Security Council (REGSEC) is asking for help to clamp down on the resurgent illegal mining industry in the area.

Municipal Chief Executive Officer of Kwahu West, Yaw Owusu Addo who spoke to Citi News said the Assembly can do little about the situation and therefore needs external aid.

“We need help. Ours is happening after the major onslaught on galamsey. So they’ve all now come here. You can find more than a thousand foreigners who have come here to besiege our town. There’s little we can do. They have metal detectors which make their work easier and once they detect it, there are troops to dig straight away and they make their gold and go away,” he lamented.

REGSEC had earlier held an emergency meeting on Thursday to seek help and lasting solutions to the upsurge of illegal mining which is on the rise in the Municipality.

This came after the information got to them that foreigners had connived with the indigenes to engage in illegal mining activities.

The members of REGSEC, after a site visit organized by the Kwahu West Municipal Security Council, expressed total shock after witnessing first hand the extent of degradation and havoc allegedly caused by the foreign nationals in farms.

The Eastern Regional Minister Eric Kwakye Darfour asked various assemblies in the region to come up with innovative ways to clamp down on activities of illegal miners threatening the region’s security.

“This can not be going on in a cocoa growing community, it is totally not accepted and we need all hands on deck to clamp down on their activities and that is why I have brought all the members of REGSEC here to ascertain what exactly is happening here so they can advise appropriately on measures we need to take.”