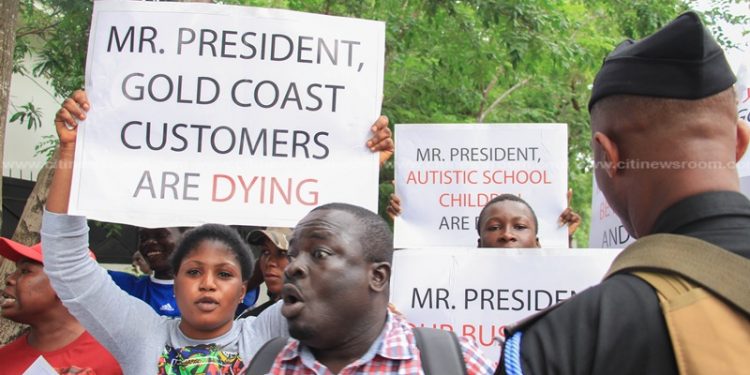 Customers of Gold Coast Fund Management now Black Shield Fund Management say the government has failed to respond to their petition to help them retrieve their locked up monies from the embattled investment firm.

The disgruntled customers embarked on a demonstration on October 15, 2019, to push for the government’s intervention in retrieving their funds from GCFL.

Addressing the media on Tuesday, the aggrieved customers say the government’s dead silence after their demonstration is disappointing.

“The government as per its posture has refused to respond to our petition presented to his outfit. We have not even received an acknowledgment of our petition despite the several follow-ups made by the leadership of this group. The question we are asking is why is the government silent on our issues. We also want to draw the attention of the general public to the government’s refusal to respond to our calls to compel the owners of the company to pay back funds owed by the customers as earlier directed by SEC.”

The group further called on the government to put in some immediate measures to ensure their funds are retrieved.

These disgruntled customers who want their investments retrieved continue to pile pressure on the company despite the initial assurances given.

In a series of protests, the customers decried the untold hardships brought on them due to the locked-up funds.

They also accused the leadership of the company of taking them for granted by showing no concern to their financial woes.

The Securities and Exchange Commission (SEC) had earlier called for calm among the aggrieved customers saying it is working to ensure that the locked-up investments of clients are retrieved.

Head of Policy and Research at the Securities and Exchange Commission, Ashong Katai indicated that the Commission was committed to ensuring that customers of Gold Coast Fund Management get back their cash.

“We can revoke the license of Gold Coast and do other things but will that solve the problem? The underlying problem is client money. That is the crux of the matter. We can arrest the directors but will they get the money? We want the clients to get their monies back because if investors lose their monies, market confidence will crash. And when confidence is crashed, the whole capital market will crash and we don’t want to get there.”

My first blogging job paid only 150 US Dollars – Linda Ikeji