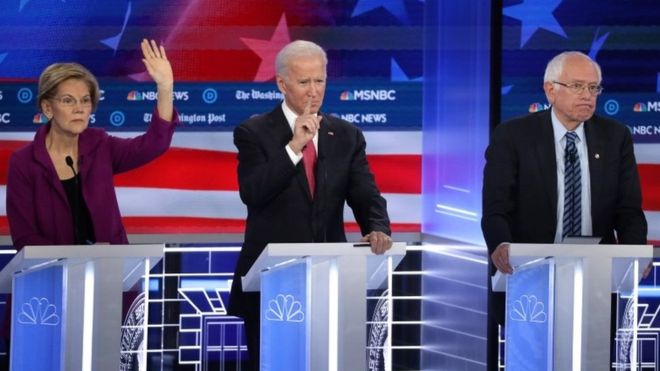 The fifth Democratic presidential debate was held on Wednesday evening at the Tyler Perry Studios in Atlanta, Georgia.

For at least a few hours, 10 presidential candidates did their best to wrest the attention of American voters away from the ongoing impeachment hearings that have dominated national headlines for weeks.

First, however, they had to address the elephant in the room.

Senator Elizabeth Warren, a front-runner and one of the first candidates to suggest Donald Trump should be impeached, said she would try to convince Republican senators to vote to remove the President by telling them to view the latest revelations about Ukraine as part of what she said was Mr. Trump’s ongoing lawlessness.

She added a plug for her anti-corruption plan, which includes a proposal to ban big campaign donors (like Gordon Sondland, the star of the day’s impeachment hearings) from being named ambassadors.

Two other candidates with strong support, Senator Bernie Sanders and South Bend Mayor Pete Buttigieg, also had an opportunity to chime in. Sanders, as he often does, labelled Mr. Trump a pathological liar and the most corrupt president in modern history. Buttigieg said the president had abused his power but pivoted to calls for unity – a major theme of his campaign.

Then there was Joe Biden, the man Trump encouraged the Ukrainians to investigate. Although the former vice-president’s once dominating lead in the polls has been greatly reduced, he said he attracted Trump’s attention because he’s the one best positioned to beat him.

With that out of the way, the Democrats turned to the kind of topics that have dominated previous debates – taxes, the environment, foreign policy and, most of all, healthcare.

It was a bit of payback after Gabbard had attacked Harris’s criminal justice record in the July debate – a moment that marked the beginning of Harris slow but steady slide from near-front-runner to a back-of-the-pack afterthought.

Sanders took a swipe at Biden’s support for what he labelled the “terrible” 2003 Iraq War.

Then there was an exchange on the Democratic Party’s appeal to black voters, which included Biden’s rather extraordinary assertion that he “comes out of the black community” in terms of his support.

That assertion sparked an incredulous response from Harris and Senator Cory Booker, the two black candidates on the stage.

Harris said minority voters are the “backbone” of the Democratic Party that is too often taken for granted.

The real fireworks didn’t hit until the tail end of the debate, however, when Senator Amy Klobuchar and Gabbard took turns questioning what they viewed as Buttigieg’s relatively thin political resume.

Buttigieg entered the debate with a target on his back. Recent polls in Iowa and New Hampshire, the first two states in the Democratic Party’s presidential nomination process, showed the mayor of Indiana’s fourth-largest city surging to a statistically significant lead.

Noting that she has a record of accomplishment winning elections in a swing state and getting legislation passed in Congress, Klobuchar said: “I think experience should matter.”

Gabbard went after Buttigieg’s suggestion that US troops should be sent to Mexico to help fight drug cartels.

Buttigieg, who clearly anticipated the attacks, had his responses ready.

As for Gabbard’s criticisms, he said he had more than enough experience to know that he shouldn’t sit down with a “murderous dictator” like Syria’s Bashar Assad – something Gabbard did in January 2017.

In just over two months, Democrats will start the process of selecting their party’s 2020 presidential candidate. In their closing remarks after the sometimes acrimonious debate, Democrats made their pitch to be “the nominee to go toe-to-toe with Donald Trump,” in Harris’ words.

The debate took place on the same day that a Marquette University poll showed Donald Trump beating all the major Democratic candidates head-to-head in a hypothetical general election matchup in Wisconsin, considered one of the key 2020 swing states.

Past debates have been characterized by contentious exchanges between the party’s centrist and progressive candidates.

This time around, the focus frequently shifted to which candidate was best positioned to take on the president, as if the participants could sense their voters’ growing concern.

“I don’t think you have to be the tallest person on this stage to be president,” Klobuchar said in what was perhaps her strongest performance in any of these Democratic debates.

Democrats, looking at that Wisconsin poll, will probably be worried about what it will take to beat Trump.

The winner of the party’s nomination might be the person who gives Democratic voters the most confidence that even if impeachment fails, Trump’s days in office are approaching an end.