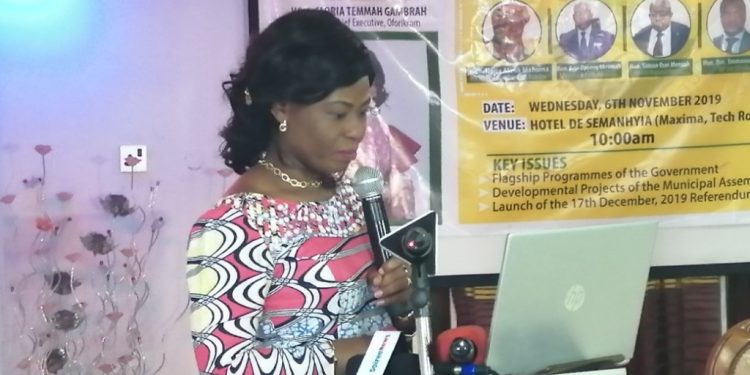 Authorities at the Oforikrom Municipal Assembly (OfMA) have said a lot of successes have been chalked in terms of spreading developmental projects across areas within the Municipality since the Assembly was carved out of the Kumasi Metropolitan Assembly (KMA).

According to authorities, though the Assembly is an infant one, administrative staff members are resolute in ensuring that more efforts are put in place to impact the lives of residents.

The Assembly outlined some of its key achievements after it was inaugurated on 15th of March 2018 during a Meet-the-Press session it organized on Wednesday, 6th November, 2019.

The projects ranged from roads to provision of street lights, construction of market and educational facilities as well as dredging drains to manage and prevent natural disasters such as flooding.

The Assembly said it has embarked on routine maintenance of 16.20 km roads in the Municipality and will extend similar exercise to other communities within the municipality that are grappling with poor road network.

In the area of provision of water, the Assembly has drilled mechanized boreholes for residents of Deduako, Kotei-Twumduase, Anwomaso, Bomso (Tech electoral area) and the Kentinkrono CHPS compound.

The Bomso M/A, Deduako M/A and Emena M/A schools have also had their playing fields graded and levelled for them.

In the area of managing disaster and flooding, water channels at Ayigya-Akatego, Emena, Accra Town, Anloga, Boadi, Apemso, Deduako, Kotei and Anwomaso have been dredged.

The Assembly has also constructed a wooden footbridge at Anloga- Susan Akyi.

It had also undertake construction work on 42 market stalls at Kotei and the supply and installation of streetlights within the Oforikrom Municipality.

Chief Executive for the Oforikrom Municipal Assembly, Gloria Temmah Gambrah speaking to journalists at a Meet the Press event said the Assembly has always consulted chiefs and people in the municipality before embarking on any developmental project.

According to her, “all the projects we have done and the ones we are doing, we do them through people-centered approach. It is not something we sit in the office and do it, later they come back and tell us they do need it”.

The MCE called for support from residents to enable the Assembly work to bring more development to their doorstep.

The Assembly has also launched a sensitization campaign and pledged to intensify education to ensure more YES votes in the upcoming referendum.

Water supply to parts of Accra suspended over damaged pipelines

Ban on recruitment to Gulf Countries to be lifted soon – Government

Ban on recruitment to Gulf Countries to be lifted soon - Government