Peace Council calls for acceptance of roadmap for ending vigilantism 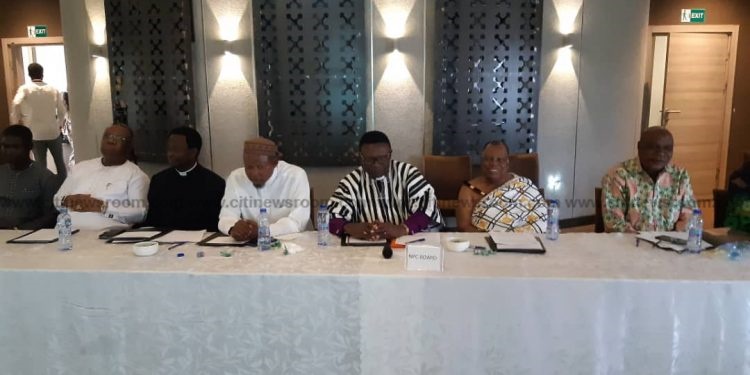 The National Peace Council has called on the New Patriotic Party (NPP) and National Democratic Congress (NDC) to endorse and adopt the Draft Roadmap and Code of Conduct on political vigilantism.

The document has been developed by a Technical Committee as part of an ongoing dialogue aimed at ending political vigilantism.

Speaking at the commencement of Thursday’s dialogue, the Chairman of the National Peace Council, Professor Emmanuel Asante said the document will assist existing legislations and other frameworks on ending the menace.

“It is therefore the wish of the National Peace Council and our partners that the two major parties will complete the process as they have already done in the passage of the Vigilantism and Related Offences Act and in the dialogue so far conducted by publicly endorsing and signing the road map including the code of conduct on political vigilantism.”

“We are making history and it is my prayer that our children and children’s children will live to bless our days especially you our leaders for standing firm and making choices that will secure for them and their generations the democracy, peace, and security of their days,” he said.

The political vigilantism dialogue was instituted by the National Peace Council following the events that unfolded at the Ayawaso West Wuogon Constituency by-election.

Though there were initial disagreements between the NDC and the NPP, both parties claim they are committed to ending the menace.

The dialogue was meant to focus on examining the draft roadmap and code of conduct prepared by the Technical Committee as part of steps to tackle the menace.

Although the NDC had been to the various sittings, it was absent at today’s session due to circumstances beyond its control, according to the National Peace Council.

Professor Emmanuel Asante, however, said that the NDC will receive a copy of the draft roadmap that the NPP had accepted in principle at the end of discussions.

“They [the NDC] are fully aware that this document is being discussed. The outcome will be conveyed to them and a date will be set for the public signing after we have endorsed it,” he said.

According to President Akufo-Addo, “a person who directly or indirectly instigates or solicits the activity of a vigilante, facilitates or encourages vigilantism, or conceals a vigilante to avoid lawful arrest, commits an offence, and is liable, on conviction, to a term of imprisonment of not less than ten (10) years and not more than fifteen (15) years.”

The opposition NDC had earlier described the President’s call for the two political parties to discuss ways to disband political vigilante groups as “flowery verbiage”.

According to them, political vigilantism could only be solved if there is a genuine political will backed by the government’s actions.

The party was also of the view that there are already existing laws in the country capable of dealing with the menace.