Shai-Osudoku residents sensitized on land use and registration processes 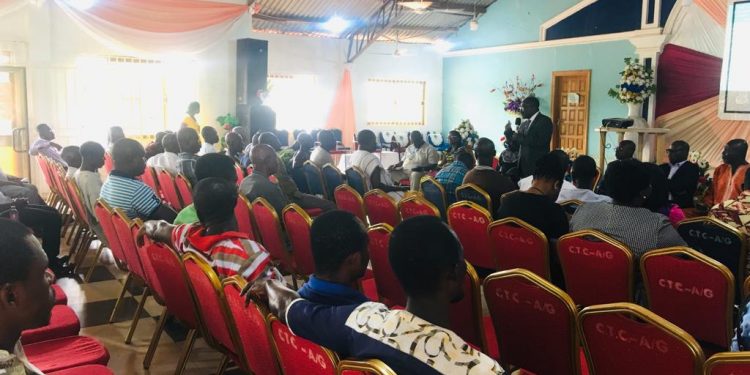 The Public Education Committee of the Greater Accra Regional Lands Commission in collaboration with the Shai- Osudoku District Assembly, has held a public forum at Shai Osudoku for some residents on land use, land registration and the mandate of the Commission.

The Greater Accra Regional Chairman of the Lands Commission, Alex Quainoo, said the engagement with stakeholders is crucial because most people often misconstrue the operations of the Commission because they have very little knowledge about its mandate.

He says government is working to digitize all land records in the country to cut down bureaucracy and delays in the land registration process, and thus cautioned chiefs and elders of the community to stop selling public and vested lands to individuals especially to people who are non-residents of the country.

He says the sensitization program would be replicated in other assemblies.

The Regional Lands Officer at the Commission, Maxwell Adu Nsafoah, explained to residents the core functions of the Lands Commission, and its various divisions such as the Public Vested and Lands Management Division (PVLMD), which manages vested and state lands, the Survey and Mapping Division (SMD), which coordinates the preparation of plans from the data derived from survey and any amendment of the plans, the Land Valuation Division (LVD) which assesses stamp duties and valuates, and the Land Title Registration Division (LRD), which deals with the registration of lands in the country.

He also spoke about the establishment of the Clients Service and Access Unit (CSAU), which is a one-stop shop for all business transactions conducted at the Lands Commission.

He encouraged the residents to insist on a site plan to conduct a search from three divisions of the Commission before buying any land, and also cautioned them against fraudulent dealings with middlemen posing as staff of the Commission.

He asked them to visit the Clients compensations Service and Access Unit for any transaction they want to undertake.

The Regional Director of the Land Use and Spatial Planning Authority (LUPSA), Mrs. Francisca Okyere, also educated residents on the importance of spatial planning process.

She asked them to avoid building on water ways, and rather plan well before they carry out building projects, adding that proper planning ensures orderliness and beautifies human settlement.

To ensure that residents of Shai Osudoku do not encroach on vested lands within the District, a proposed scheme plan of vested lands was presented to the residents.

Areas demarcated for specific purposes such as hospitals, schools, farming among others, were all presented on the map.

Chiefs and family heads, who had sold lands within the demarcated areas, were given a one-month ultimatum to submit their site plans for them to be incorporated into the proposed scheme of the Commission or risk losing their lands entirely.

They were also cautioned against multiple land sales as it causes overlaps and does not ensure smooth registration of lands by individuals at the Lands Commission.