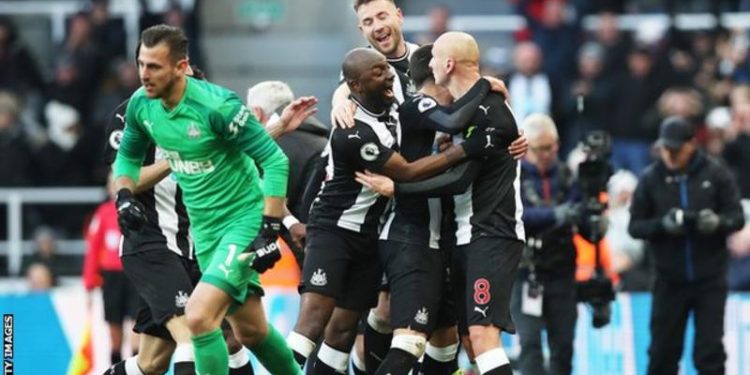 Pep Guardiola must have thought his side had won it when Kevin de Bruyne found the net in the 82nd minute with a brilliant long-range effort which went in off the crossbar.

But with two minutes of normal time remaining substitute Christian Atsu pulled the ball back for his team-mate Shelvey, who beat the dive of Ederson with his strike.

That is now 13 points dropped by Pep Guardiola’s side who are eight behind Liverpool before the leaders host Brighton at 15:00 GMT.

It all began well for City when they took the lead after an early period of dominance.

David Silva, sorely missed by the champions in their recent defeat against Liverpool, highlighted his worth with a deft backheel to find Raheem Sterling, who curled in for his 14th goal this season.

However, before City could assert their dominance the Magpies equalised through full-back Jetro Willems, who received a square pass from Miguel Almiron before calmly slotting past the Brazilian keeper.

That was the Dutch loan signing’s second of the season and the eighth Magpies goal in the last 10 scored by a defender.

City’s Gabriel Jesus and De Bruyne were thwarted by Martin Dubravka after the break before substitute Bernardo Silva pulled a shot wide from eight yards. And in stoppage time Sterling’s shot from six yards lacked venom which allowed Dubravka to make an easy save.

Up next is a trip to Burnley for Guardiola’s side, who now cannot afford any more slip-ups.

Gov't to launch website to centralise passport application, others in 2020