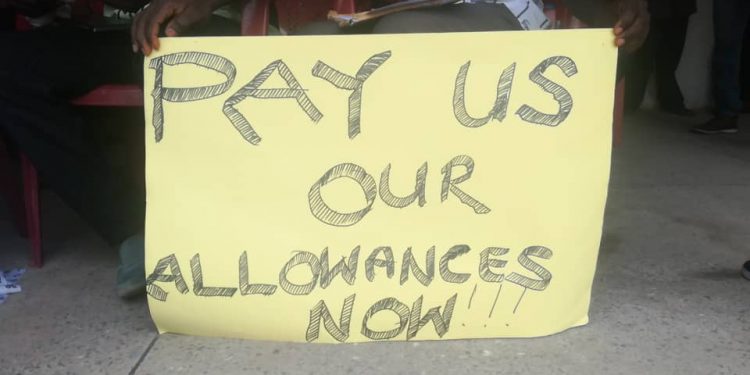 Beneficiaries of the Youth in Afforestation program of the Youth Employment Agency are impressing on the government to quicken payment of their allowances, which are in arrears of six to ten months.

Last Friday, a Deputy Lands and Natural Resources Minister in charge of Forestry, Benito Owusu Bio, announced the release of funds to cater for two months, four days after scores of beneficiaries besieged the Ministry of Finance to demand their unpaid stipends.

The protest came after similar ones which were held in March and August 2019.

Speaking to Citi News, however, some of the beneficiaries, some of whom have been paid only a month’s allowance; want the government to act in an expeditious manner.

Some of them said, “as at the time they were leaving the office last Friday, their accounts had not been credited yet.

“Our problem is not the delay in monthly payment but rather they gave us a month’s allowance once in five months. So they are owing us for close to four to five months. So, when the money hits your accounts, you probably owe some people who you have to settle. We appreciate the employment opportunity but when jobs are created and beneficiaries are not paid, then it becomes another issue”, another one fumed.

One other frustrated beneficiary said:

“We are facing a lot of problems because of the delay in payment. It has not been easy, we are struggling. For the five months that we have worked, I have received only a month’s payment. Getting transportation has been difficult, that is why we need to demonstrate so the government knows all these.”

These concerns being raised by the unhappy beneficiaries come barely two days after Government said it had started paying accrued allowances to some beneficiaries.

A Deputy Lands and Natural Resources Minister-in-Charge of Forestry, Benito Owusu Bio, disclosed that two months of arrears have been paid.

He attributed the delay to the number of days it takes after the Controller issues the monies.