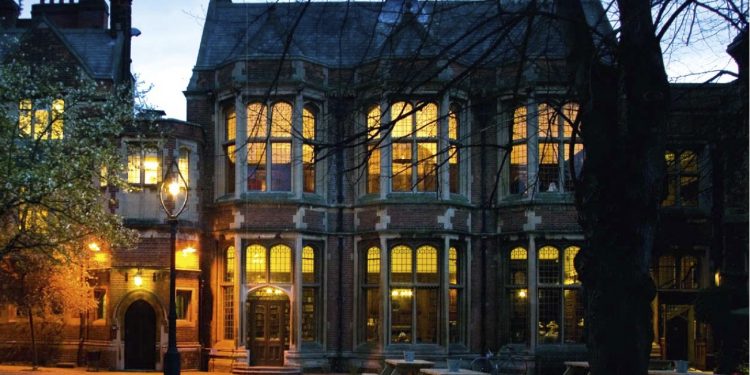 A visually impaired Ghanaian student suffered in the hands of the security officers at the Oxford Union after he was allegedly dragged out of a debate hall with excessive force.

The MPhil in International Relations student at St John’s College, Ebenezer Azamati was allegedly abused and meted with the unfair treatment because he arrived at the premises before the commencement of the debate.

His union card was also allegedly taken from him.

It is reported that Mr. Azamati left behind some personal items in his quest to access a proper seating place but the altercation occurred when he decided to come back to the chamber although some others had been allowed entry.

Some eyewitnesses accused the union staff of being unnecessarily violent towards Mr. Azamati.

They argued that the blatant disregard for the rights of members is unacceptable.

Meanwhile, a concerned group, AfriSoc is demanding an unreserved apology, recantation of the ban, punishment of the security personnel and compensation for Mr Azamati.

Unfortunately, it is yet to receive acknowledgement of a letter to the Oxford Union for a reaction to their demands.

The society says it is, therefore, proceeding on a peaceful protest against the Oxford Union to express its displeasure for justice to be served.

Here is the society’s full statement:  An injury to one is an injury to all

Our attention was brought to the unfair and unjust treatment of our member, Mr. Ebenezer Azamati, a Ghanaian Mphil in International Relations student at St John’s College.

He was violently assaulted by an Oxford Union Security personnel on the evening of the 17th of October for simply exiting and re-entering the Union chambers before the commencement of a debate. You can read our full statement here.

After hearing from Mr. Azamati himself and other witnesses, we sent a letter to the Oxford Union on Wednesday, the 6th of November, 2019 demanding for an unreserved apology, recantation of the ban, punishment of the security personnel and compensation for Mr Azamati.

Unfortunately, we neither got an acknowledgement of our letter nor a reaction to our demands.

Hence, the society is proceeding on a peaceful protest against the Oxford Union to express our displeasure and demand for justice until our demands are fully met.

What is more disturbing is that, after the terrible treatment meted out to Mr. Azamati,—Brendan McGrath, the President of the Union—who was absent at the scene of the incident personally lodged a complaint against Mr. Azamati for violent behaviour.

This is a shocking response given that he was not, in fact, the perpetrator of violence but a victim. Brendan McGrath then proceeded to oversee an unfair hearing where Mr Azamati was not given sufficient time to bring his witnesses and which resulted in the suspension of Mr. Azamati’s Union membership until May 2020.

The manner in which Brendan McGrath and the Union have handled this matter is inhumane, not least given the dignity of an individual at stake. AfriSoc is deeply concerned by the physical, emotional and psychological trauma Mr. Azamati has had to endure in the past few weeks due to reckless leadership on display at the Oxford Union.

To ensure the safety of all persons—not least those that are physically or otherwise challenged—should be more intuitive than even legally prescribed. In this case, it is prescribed, and Schedule G of the Union’s rules and standards (policy for the protection of children and vulnerable adults) explicitly calls for the protection of vulnerable adults and children with disabilities who come to the premises of the Union.

That the Union failed in this basic responsibility is sufficient grounds to demand for the resignation of the Union President, Mr. Brendan McGrath. AfriSoc thus calls on the President of the Union to consider his position given that his conduct on this matter renders him unfit to assume the position of responsibility.

In addition, AfriSoc will proceed to protest against the Oxford Union until our demands are fully met. AfriSoc holds this case as not only a grave injustice to Mr Azamati but to all African students, students with disability needs and all students at the University of Oxford with the heart and mind to appreciate the unfair and undignified treatment of Mr. Azamati.