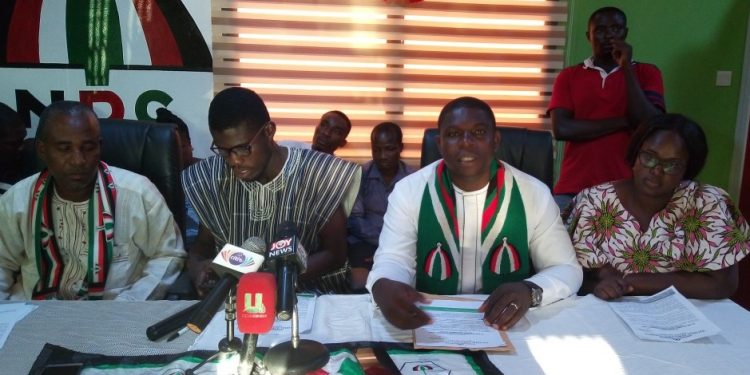 The National Democratic Congress (NDC) in Gomoa West constituency has accused the New Patriotic Party (NPP) of throwing dust into the eyes of the people of Gomoa West.

According to the NDC, leadership of the NPP in the constituency at a recently held meet the press series credited some projects which were undertaken by the John Mahama administration to the governing party.

The NDC described the move as an attempt to deceive the people of Gomoa West.

“I want to talk about what the MP, the DCE and the Central Regional Minister did last week at the desperate meet the press series where they attributed some projects which the NDC did under their tenure to themselves. I want to state on authority that most of  the things they stated in the brochure are all lies,” Communications Officer for Gomoa West NDC, Jerry Kissi Dei Yeboah said.

Speaking to Citi News at a press conference in Dewurampong, Mr. Yeboah explained that the 20-page documents which the New Patriotic party outdoored at its conference contained lies.

“Apparently they talked about health, security, roads, mechanized water system among others but we can say for a fact that when it comes to health, nobody beats the NDC in Gomoa West,” he added.

According to the Communications Officer, some of the schools the NPP claim it has extended the school feeding program to has never been operational.

He also added that the NPP’s claims that it has extended the school feeding program by 40% in the constituency must not be taken seriously.

“We can tell you for a fact that some of the schools they claim they have expanded are not true. The school feeding program too is not operational. A typical example is the Gomoa Mankwade D/A Basic School and since the beginning of this academic year it has never been operational and nobody has stepped there. Nobody has fed the kids,” Mr. Yeboah indicated.

According to the NDC, the Gomoa Dego road which leads to Mumford was constructed less than eight months ago but has gradually washed away thus becoming a death trap.

“Talk about security and we will tell you that they have done nothing to protect lives and properties. They built cubicles all in the name of protecting valuable lives,” Kissi Dei Yeboah added.

Parliamentary Candidate for the NDC in Gomoa West, Richard Gyan Mensah indicated that major road contracts were cancelled by the current administration when President Akufo-Addo took over.

“In the whole Gomoa West, the only good road you can talk of as a constituency is the main road and this is bad because during the time of the NDC, we started working on the major trunk road from Gomoa Ankamu to Afransi and we were actually almost about 60% complete but unfortunately we lost power and the contract was cancelled,” the Parliamentary candidate noted.

According to him, when given the mandate as the Member of Parliament for the area, he will help address some of the challenges of the people.

“This is one of the reasons why some of us we want to side with the people not just because we want power but how best we can help to get the people what they want by way of bringing development,” Richard Gyan Mensah, Parliamentary candidate for the NDC added.