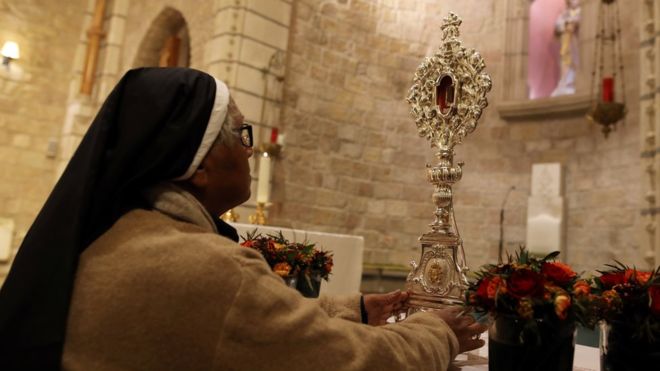 A fragment of wood believed to have formed part of Jesus’ manger is set to be returned to Bethlehem after more than 1,000 years in Europe.

Pope Francis ordered the return of the thumb-sized relic from Rome’s Basilica of Santa Maria Maggiore as a gift.

The relic had been in Rome since the 7th Century.

It was briefly put on display in Jerusalem before continuing its journey to Bethlehem to coincide with the start of Christmas celebrations there.

Officials said it would now be kept in the Franciscan Church of St Catherine, next to the Church of the Nativity, where tradition says Jesus was born.

Christians believe the tiny piece of wood formed part of the crib that Jesus lay in after being born.

Custodia Terrae Sanctae, the custodian of Catholic religious sites in the Holy Land, said the Patriarch of Jerusalem, St Sophronius, donated the relic to Pope Theodore I in the 7th Century.

It said the relic had since been kept on display in Rome’s Basilica of Santa Maria Maggiore, where a “very large number of pilgrims from all over the world” went each day to “venerate it”.

While most of it has remained in Rome, the return of the small fragment was widely celebrated by Christians in the region.

“My heart is beating. I’m really crying from joy for this event and thankful also for the Pope, for this kindness that he brought to Bethlehem,” Louisa Fleckenstein, a guide for pilgrims visiting the Holy Land, told AP news agency.

The Vatican has described the return of the relic as a gift from Pope Francis.

Its return coincided with the beginning of Advent, a four-week period leading up to Christmas.

Reason for new cedi notes ‘does not make sense’ – Adongo