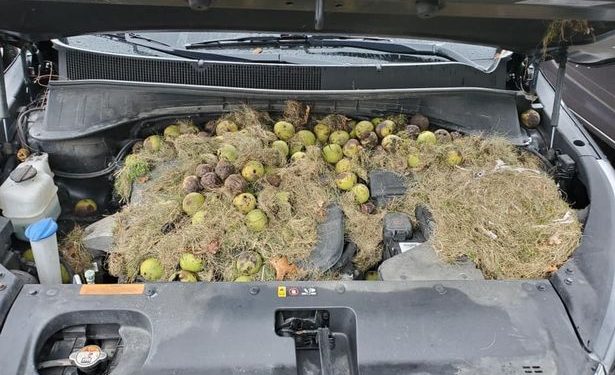 A woman who noticed an odd whiff coming from her car got the shock of her life when she lifted up the bonnet to discover more than 200 nuts hiding inside.

Holly Persic, from Pittsburgh in the US, knew something was amiss when she parked outside a library and the waft of burning began to fill the air.

She could also hear a strange sound coming from underneath the bonnet.

But nothing could prepare her for the sight of the hundreds of walnuts and clumps of grass.

A family of squirrels had seemingly decided to stock them there for safekeeping ahead of winter.

Holly’s husband Chris explained: “My wife called me from Northland Library and said that her car smelt like it was burning, and was making a weird sound.

“I told her to pop the hood, and this is the picture that she sent me!”

It took almost an hour for the pair to get the nuts out before they could take it to a garage.

“They were everywhere, under the battery, near the radiator fan,” Chris added to CNN.

“The walnuts on the engine block were black and smelt like they were definitely roasting.”

Thankfully mechanics were able to remove any remaining nuts and there was no damage done.

Chris also discovered the cheeky critters may have been to blame for fault on his vehicle too.

He added on Facebook : “My truck may have had a squirrel chew through/pull out a fuel injector hose, and Holly’s looked like they were storing up for the next three winters.

“Was absolutely nuts … no pun intended.

“Long story short, if you park outside, do yourself a favour and check under the hood every once in awhile.”

The last time Holly had looked under the bonnet had been a month earlier, and the walnuts in their garden had only begun to fall a few weeks ago.