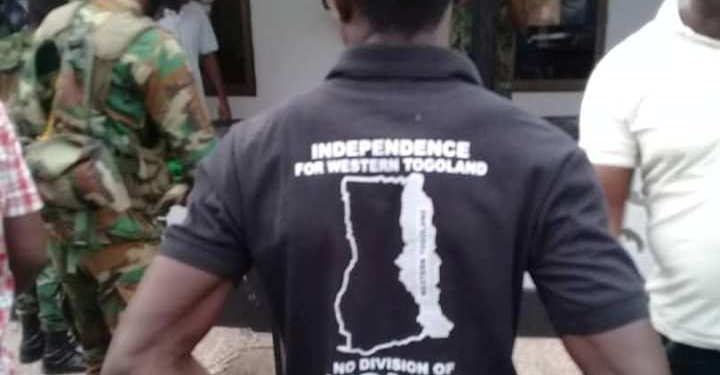 A total of 17 persons have been arrested in connection with an alleged Western Togoland Millita training in the Hohoe municipality of the Volta Region.

The 66 Artillery Regiment based in Ho, the Counter-Terrorism Unit of the Ghana Police Service, the Defence Intelligence (DI) and the Criminal Investigations Department (CID) of the Ghana Police Service Accra conducted two separate Counter Insurgency Operations (COIN) within the Hohoe Municipality of the Volta Region to counter activities of the Western Togoland Secessionist group.

“The first operation which was conducted from 0300 hours to 0535 hours on Saturday 21 December 2019 at Wli Todzi led to the arrest of two (2) persons namely Stephen Anyidoho, a construction labourer aged 30 and a native of Dzodze and Brain Todoko, an artist aged 40 and a native of Wli Todzi. The two are suspected to be close associates of one Mr Hope Mortey also known as ‘Spider’, who is believed to be a key member of the HSGF and suspected to be in charge of a Training Camp at Wli Todzi for Militants of the group,” the statement read.

“The second operation took place on Sunday 22 December 2019 between the hours of 0200 hours and 0430 hours around Gbledi Kyebi, Fodome Helu and Kwadzato all in the Hohoe Municipality. This operation also led to the arrest of 15 suspects.”

Some of the items found in custody of the suspects included Western Togoland branded shirts, berets, flashlights, boots, police belts, flags of Western Togoland, a cheque book and a list containing items needed for training.

This was captured in a statement issued by the 7 Garrison Public Relations Department, Volta Barracks of the Ghana Armed Forces.

The statement also disclosed that all the arrested persons and the items seized are currently in the custody of the Ghana Police Service for further investigations.

“All those arrested and the items seized are currently in the custody of the Ghana Police Service for further investigations. “

The Ghana Armed Forces however assured the public that the various security agencies in the Volta and Oti Regions are in firm control of the situation.

“The General Public is therefore asked to remain calm and be assured that the Security Agencies are in firm control of the situation and will deal with any individual or group found to be actively engaged or associated with the said HSGF or any other Secessionist Group.”

In December this year, the Police in the Volta Region arrested some 21 persons who are members of the Homeland Study Group Foundation for unlawfully gathering at the premises of Global FM in Ho.

The suspects, according to the police, are from various parts of the country including Anlo Afiadenyigba, Volo, Volo, Dambai, Obuasi, Battor, Weta, Atiavi, Fodoku.

The police, in a statement, said the arrest was based on intelligence that the suspects were planning to demonstrate against the judicial process involving the trial of seven of their members standing trial for treason felony.

The Separatist group initially known as the Homeland Study Group Foundation on 16 November 2019, declared their independence from Ghana and named the supposed new State as Western Togoland.

According to the group, Western Togoland covered areas such as Volta, Oti, parts of the Northern, North East and Upper East Regions.

The Homeland Study Group Foundation, led by 80-year-old Charles Kormi Kudzodzi – popularly known as Papa Hogbedetor have been in the news in recent times over their campaign for the cessation of some part of the Volta Region from Ghana to be known as “Western Togoland.”

Recently in a viral video, some members of the group were seen in a supposed independence declaration event.