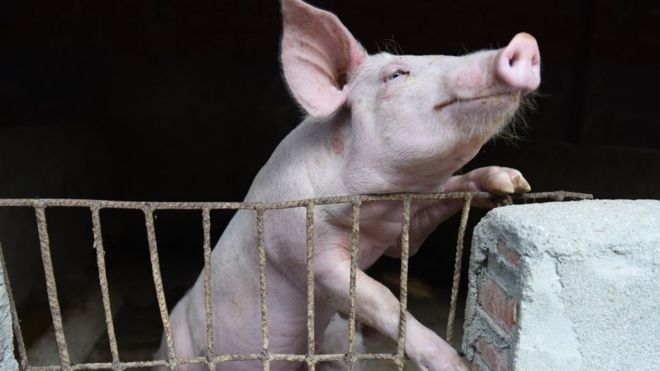 Indonesia has become the latest Asian country to face an outbreak of African swine fever, a deadly pig virus devastating farmers across the region.

On Wednesday, the country’s agriculture ministry said nearly 30,000 pigs have died from the disease in North Sumatra.

The virus is expected to wipe out more than half of China’s pig herd this year.

Although it’s harmless to humans, the disease can kill pigs within a few days, and the fatality rate can be up to 100%, according to the World Organisation for Animal Health (OIE).

The virus is particularly robust, and is able to survive for seven days without a host, and for months in frozen pork products.

Which countries have reported outbreaks?
The biggest impact so far has been in China, but the spread of the virus across South East Asia has been worrying too.

Vietnam and the Philippines have seen some of the worst outbreaks in the region.

Analysts at Rabobank expect Vietnam’s pork production will drop by 21% this year, and by an additional 8% next year.

Indonesia’s Agriculture Minister Syahrul Yasin Limpo told reporters so far, the virus has been contained to parts of North Sumatra.

“Very serious handling is being carried out, including isolating those areas,” Mr Limpo said.

The disease has also been detected in Mongolia, Cambodia, South Korea, North Korea, Myanmar and East Timor, according to the UN Food and Agriculture Organisation.

Outside of Asia, the OIE said the disease is also present in parts of Eastern Europe and sub-Saharan Africa.

How have other countries responded?
Australia, known for its strict biosecurity measures, is spending an additional A$66m ($45m; £35m) on measures designed to keep the virus out.

However, recent seizures underline the difficulty of the task.

Over the past six months, Australian authorities have seized 32 tonnes of pork products from passenger bags and mailed packages.

“Of that, 49% had fragments of African swine fever,” said Margo Andrae, chief executive of Australian Pork Limited, an industry body.

Australian Pork Limited estimates an outbreak could have a A$2bn impact on the industry, which is worth A$5.3bn and employs 36,000 people.

Significantly, Australia has tightened quarantine efforts in Darwin – the main point of entry for flights from East Timor, which recently declared a swine fever outbreak.

Although there are no piggeries near Darwin, there is a large feral pig population that could spread the infection.

“If you’d asked me a few months ago, I would have said I’m very scared, but now I feel much better,” said Ms Andrae. 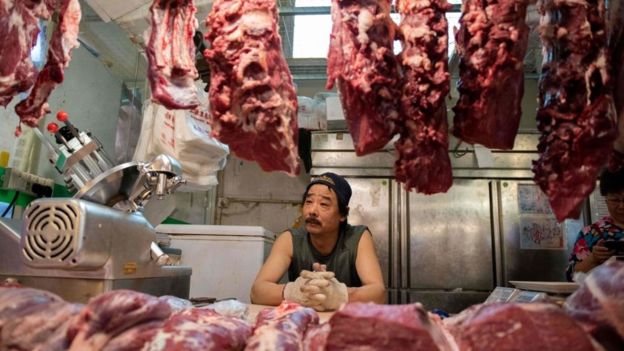 Germany recently stepped up measures to prevent the disease after a case was discovered in a wild boar across the border in Poland.

The US has never had a case of African swine fever, but there are animal health and import requirements enforced by authorities.

What about the impact on the pork industry?

Pork prices across Asia have increased, and in some cases, fuelled inflation.

China’s most recent inflation figures showed consumer prices rising at 4.5%, the fastest level in nine years, with pork accounting for much of that increase.

Ratings agency Fitch said that domestic wholesale prices in the country nearly doubled in 2019, and predicts prices in South East Asia are also likely to rise.

Rabobank said that China’s pork imports from the US have doubled. Beef and chicken prices have also increased because of additional demand from consumers switching from pork.

Tommy Wu, economist from Oxford Economics, said there’s likely to be an additional price spike in the coming months as demand grows for Chinese New Year.

The good news, Mr Wu said, is that China’s biosecurity efforts have started to have an impact.

He thinks the industry in China has turned a corner, but he cautions that a full recovery could take years.

“We’re still looking at 40% below peak in terms of pig stock,” he said.