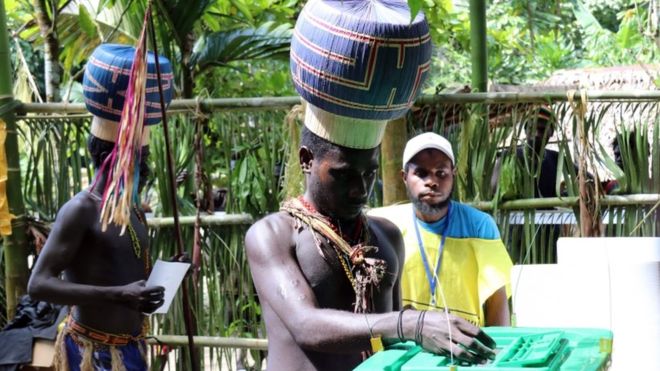 Upe men casting their votes during the referendum

The people of Bougainville, an island group in Papua New Guinea, have voted overwhelmingly for independence.

Voters had two options – more autonomy, or full independence. Of the 181,000 ballots, almost 98% were in favour of independence.

The referendum was approved by the Papua New Guinea government, but the result is non-binding.

Nevertheless, the landslide victory will put pressure on PNG to grant Bougainville independence.

The results were announced in the town of Buka by former Irish Prime Minister Bertie Ahern, the chairman of the Bougainville Referendum Commission.

“You see my tears – this is the moment we have been waiting for,” she said.

Why was there a referendum?

Bougainville had a nine-year separatist war that began in 1988, fuelled by economic grievance.

The end of the fighting led to the Bougainville Peace Agreement, the creation of the Autonomous Bougainville Government, and the promise of a non-binding referendum on independence.

Even in colonial times, Bougainville was an outpost. The islands attempted to declare independence during the formation of Papua New Guinea in 1975 – but they were ignored.

Discussions will take place with the Papua New Guinea government to decide when – or if – the transition to full independence can begin.

Although the PNG government was against independence and does not have to accept the result, the huge mandate will make it hard to ignore.

The 98% result is above pre-referendum predictions – most experts expected the figure to be around 75% – 80%.

The PNG minister for Bougainville affairs, Puka Temu, said “the outcome is a credible one” – but asked that voters “allow the rest of Papua New Guinea sufficient time to absorb this result”.

Is Bougainville ready for independence?

The new country – should it happen – would be small, with a landmass of less than 10,000 sq km (slightly larger than Cyprus, and slightly smaller than Lebanon).

Likewise, its population would be one of the world’s smallest – slightly smaller than Pacific neighbour Vanuatu, and slightly bigger than Barbados.

But according to research by Australia’s Lowy Institute, Bougainville self-reliance would at best be years away.

The country is rich in natural resources – especially copper, which has been extracted on a large scale since the 1960s under Australian administration.

But mining was been crippled by the war – and the distribution of revenue was one of the factors behind the conflict.

One estimate cited by the Lowy Institute says Bougainville would only have 56% of the revenue needed to be self-reliant.