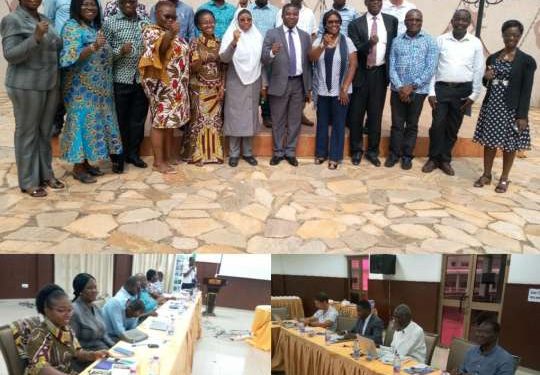 The Council for Scientific and Industrial Research (CSIR), Ghana has called on the government to establish a robust quality seed-yam system by adopting the ‘aeroponics’ and ‘hydroponics’ methods of cultivation to boost yam production.

Aeroponics is an alternative form of gardening that does not require soil or water as a medium for growing, and the plants survive with the roots exposed to the air.

In Hydroponics method of cultivating, plants are grown in water instead of soil and mineral solutions are added to the water to help them survive.

The recommendation was to reduce challenges farmers went through in cultivating yam and the rate at which the economy was largely affected by low yam yield and export.

Traditionally, farmers save their own seed yams at the end of every farming season and the quality of the seed they save has always been problematic due to the presence of disease pathogens, often resulting in significant reduction in yield.

The CSIR scientists at the Crop Research Institute (CRI), apart from the aeroponics and hydroponics, had also identified the use of tissue culture, and temporary immersion bioreactor systems, as other better ways for yam cultivation.

Professor Paul P. Bosu, the Deputy Director-General, Research and Development of the CSIR-Ghana gave the recommendation at an Advocacy Forum organized by the Council on Thursday in Accra on the implementation of the “Yam Improvement for Incomes and Food Security in West Africa PHASE 2 project (YIIFSWAII).”

The objective of the project was to increase yam production by at least 30 percent, while the strategy was to use a market based, integrated approach to
deliver clean and quality seed of improved yam varieties to at least 320,000 smallholder farmers for long term benefits.

It is projected that by the end of the project, 7,700 Seed Enterprises would supply approximately 247,000 hectares of ware yam in six states in Nigeria and two regions in Ghana.

Prof. Bosu said Ghana was currently the leading exporter of yam, accounting for about 94 percent of total yam exports from the sub-region.

It was therefore of utmost importance that Ghana and the entire sub-region, promoted the application of modern scientific methods and technologies to ensure sustainable yam production, he said.

Professor Marian D. Quain, a Principal Research Scientist, CSIR-CRI Kumasi, said the newly developed system of yam production, ought to be embraced by all especially women and the youth.

She urged the government to create mechanisms for the system to be employed in its “Planting for Food and Jobs” initiative to boost production.

“At the world market, traceability is required to know the source of the yams exported, therefore, when Ghana uses a clean seed system, the nation can be sure of the quality of yam it exports,” she said.

Dr. Norbert G. Maroya, the Project Leader, YIIFSWA, said cultivating yam with the new technologies had been tried and tested and proven to yield more than cultivating yam the ordinary way.

He reiterated that the government had a responsibility to support the laudable initiative and research by the CSIR.
“It will be a shame for West Africa and Ghana in particular when the level of production and export of yam starts declining. We need more support from the government because now we can produce clean planting material and quantity.

“At first, when you harvest yam, you have to save some part of it to replant, but now we don’t have that problem anymore”.

Dr. Patricia Acheampong, a Senior Research Scientist, CSIR, said the system when adopted, would benefit the country especially in terms of employment as it would bring out the interest of the youth in agriculture and enhance high production.

She said yam contributed a lot to food security, however, the CSIR observed that instead of farmers getting 30 to 40 tonnes per hector, they were getting 10 tonnes, which affected economic development by increasing the cost of yam sold in the markets.

It was also noticed that there were low yields because farmers did not have access to seed yam, and had to allocate part of the yam they yielded for reproduction, hence the initiative and advocacy.

The forum was attended by representatives from the Ministry of Food and Agriculture and stakeholders from the private sector, development partners, researchers and university departments of Agricultural Production.