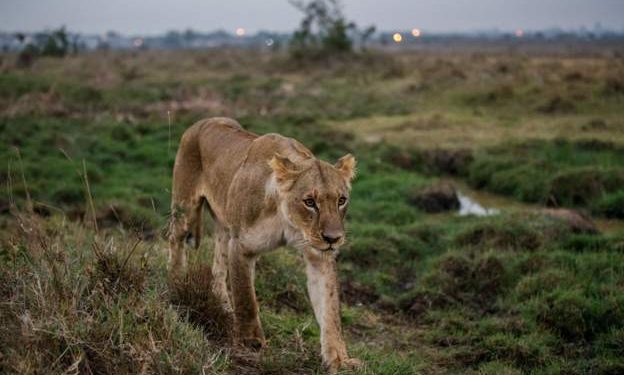 The Kenya Wildlife Service (KWS) is tracking a lion which has eaten a man in a residential area on the outskirts of the capital, Nairobi.

Residents have been warned to stay indoors while the hunt continues.

Anxiety is spreading in the Rongai area where the mauled remains of a man were discovered on Monday morning.

He had been partially eaten by a lion, which is believed to have strayed from the adjacent Nairobi National Park.

KWS has said in a statement that it is saddened by the tragic death and has sent a team of rangers and a vet to locate and tranquillise the lion.

Members of the public have been cautioned to stay indoors at night until the lion is captured.

It is not uncommon for lions to stray from Nairobi National Park, or from other wild animal reserves across the country, but the proximity to the capital has sometimes led to tragic encounters.

On some days, animals have blocked highways to the amusement of travellers who share the images on social media.

But on others, people have either been killed or injured with locals often rallying to kill the animals in retaliation.

It’s a human-wildlife conflict that the authorities are yet to resolve.