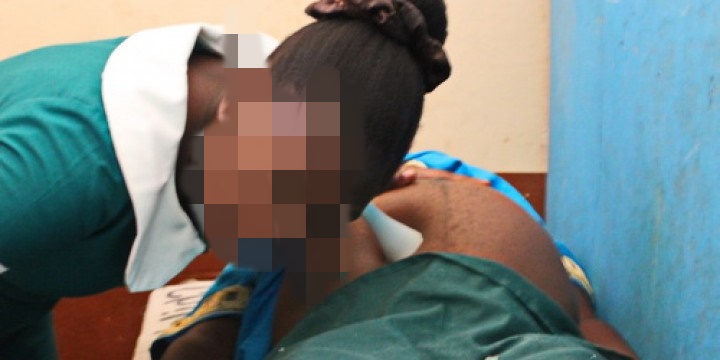 The timely intervention of a young midwife saved the life of one Mrs. Fiakeye Jennifer Etsa, a 22-year old pregnant woman and her unborn baby in a commercial vehicle at Atorkor in the Anlo District of the Volta Region.

Miss Faith Lebene Vibah, the midwife, a past student of Tamale Nurses and Midwives Training College who was on her way from Adutor to Akatsi, all in the Volta Region, abandoned her journey when she spotted people looking helpless around the pregnant woman in a parked sprinter bus at Dabala junction.

The midwife said that screams and shouts attracted her to the scene where she found that Mrs. Fiakeye was in labour and as a result, going through severe pains.

“I saw a sprinter bus with another taxi parked by it where people were making distress calls, so I got closer to find out what was happening to the people and later realised a pregnant woman was in the process of giving birth”.

“On seeing that, I dropped my luggage and rushed to rescue the woman who gave birth to a boy in the process without even using protectives for my personal safety, since it was an urgent situation, I had no option than to use my bare hands to rescue the innocent baby and the mother,” Miss Vibah said.

The family of Mrs Fiakeye Etsa, they were full of praise for the midwife for her gesture.

Miss Vibah said though she was awaiting posting, she was ready to save lives