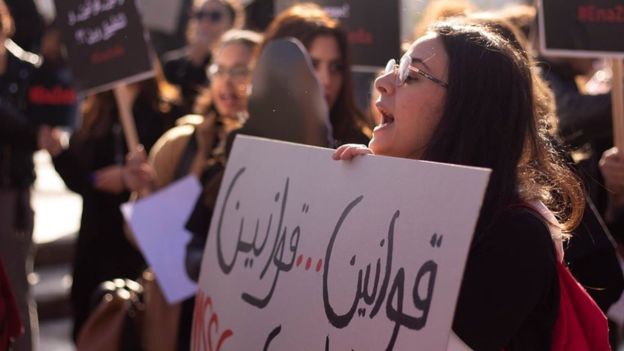 They are being shared under the hashtag #EnaZeda, which means “MeToo” in Tunisian Arabic.

The man in the photos is a recently elected MP, Zouheir Makhlouf, who denies the allegations – saying he was about to urinate into a bottle as he is a diabetic.

Women, wearing #EnaZeda T-shirts, gathered outside parliament earlier this month when MPs were being sworn in, demanding the case be investigated.

The MP technically enjoys parliamentary immunity now, though a judge is still examining the case.

The images were taken in October by a student who alleges the politician had been harassing her.

It is a safe space for victims to share their experiences – and the revelations have been a shock for the moderators of the page.

“Paedophilia and incest are more rampant than we would like to admit,” moderator Rania Said told the BBC.

The page now has more than 25,000 members, with thousands still pending approval.

There are a deluge of testimonies detailing allegations of rape, marital rape and sexual harassment.

Accusations have been made against people in the military, the police, universities, schools, the media and relatives.

It is not just women making the allegations – some men have also posted.

The level of engagement took Aswaat Nisaa by surprise, especially about child abuse that has been ignored within families.

“In the beginning especially there were so many stories about uncles, brothers, neighbours, the guy at the neighbourhood corner store,” says Ms Said.

Aswaat Nisaa put me in touch with a 36-year-old woman who said she was molested by her aunt’s husband when she was 14.

She had gone to live with the couple one summer after her father had beaten her.

“It started by kissing me on my mouth, he started touching my breasts,” she said.

“I didn’t understand what he was doing because… I never saw myself as sexual, my body as sexual yet, because nobody had talked to me about it.”

This continued for several weeks whenever he cornered her alone, until one night he entered her room.

“He climbed on top of me; he tried to force himself, but I started to shout. So he was scared because my aunt – his wife – was sleeping in the other room,” she says.