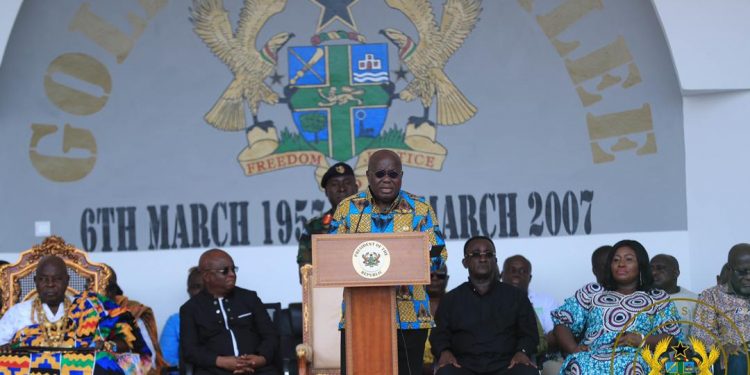 President Akufo-Addo, says Government’s programme for the revival of Ghanaian agriculture, “Planting for Food and Jobs”, is achieving considerable successes three years into its implementation.

Describing the programme as “a household catchphrase”, President Akufo-Addo stated that it has brought in its wake a bumper harvest in 2018 and export of significant quantities of foodstuff to the country’s neighbours, with the same expected for 2019.

The President made this known on Friday, 6th December 2019, when he delivered a speech at the 35th Farmers’ Day celebration at Ho, in the Volta Region.

The programme is aimed at enhancing yields of farmers through access to subsidised, improved seeds and fertilizers. 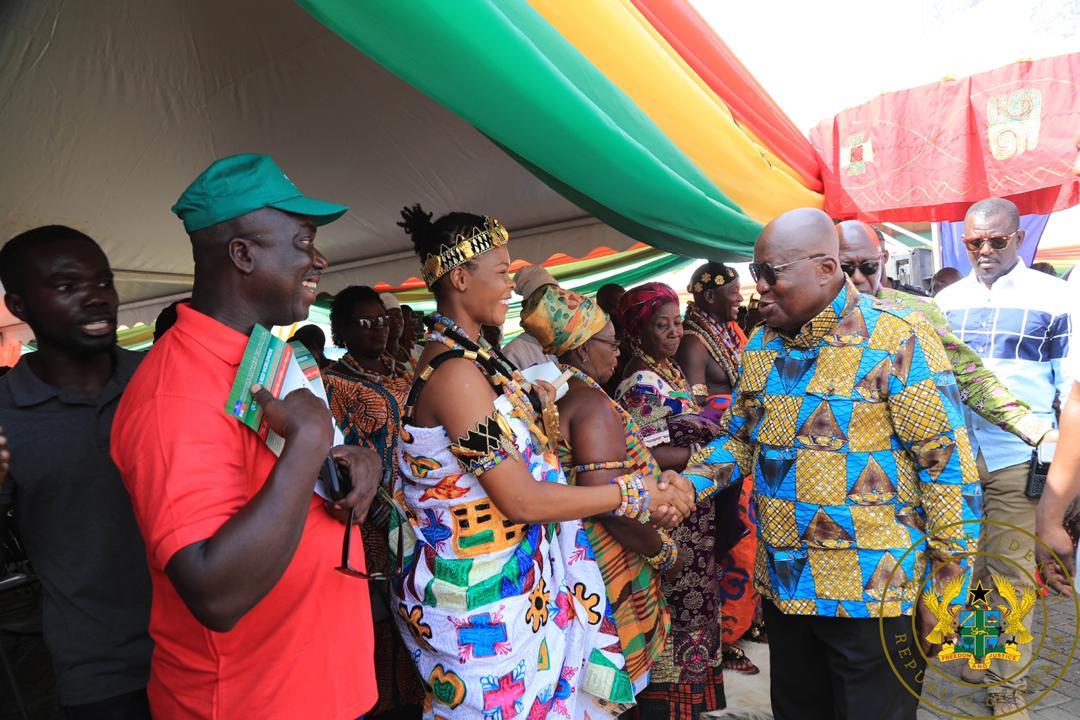 This achievement, he said, was as a direct result of the provision of subsidised fertilizer and certified improved seeds.

To date, some seven hundred and three thousand (703,000) metric tonnes of subsidized fertilizers have been distributed to 1.1 million farmers registered under the PFJ.

“The farmers have also been provided with quality, certified seeds totalling some twenty-six thousand metric tonnes (26,000) since the implementation of the Programme” the President added.

At its pilot stage, the President indicated that the livestock module seeks to attract the youth, in particular, into livestock entrepreneurship, and, ultimately, ensure self-sufficiency in meat production.

Livestock, covered under this module, are sheep, goats, pigs, cattle and poultry. Government has so far distributed seven thousand, five hundred (7,500) improved breeds of sheep to seven hundred and fifty (750) farmers, and thirty thousand (30,000) cockerels to three thousand (3,000) farmers, in six (6) regions under the Rearing for Food and Jobs module. Progressively, the implementation of this module will cover the entire country. 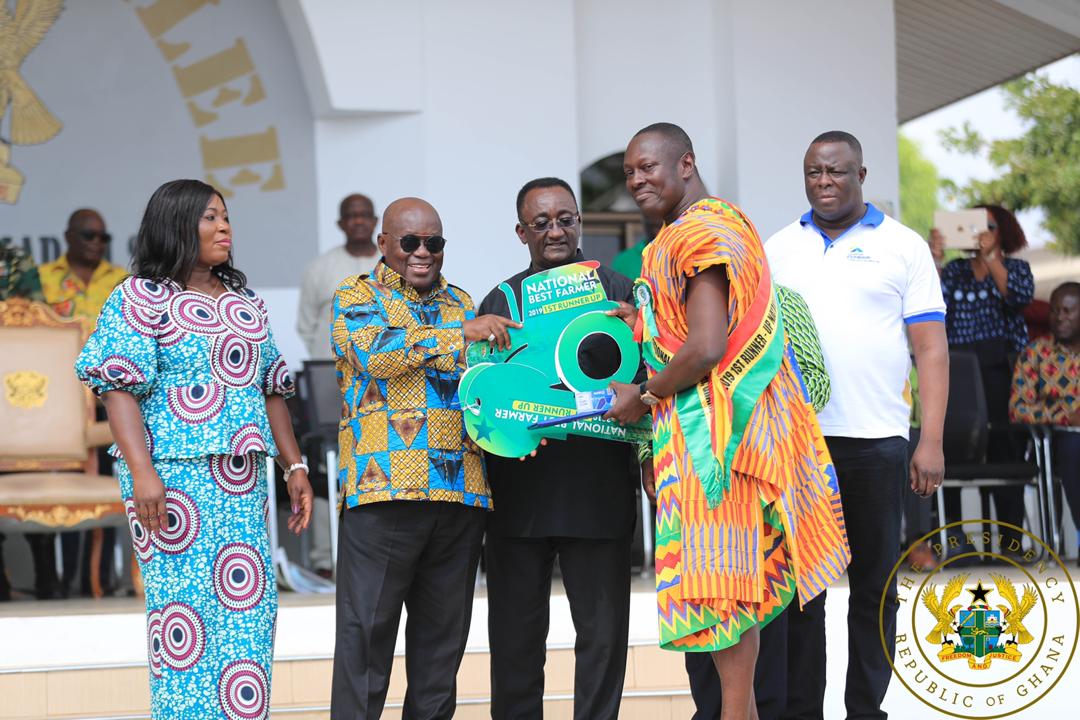 Thus far, seven tree crops have been selected for special attention. They are cashew, coffee, oil palm, rubber, coconut, mango and shea. MMDCEs have been given responsibility to establish seed gardens and produce seedlings for distribution to farmers all over the country free of charge.

“The target is to plant enough seedlings over a period of six (6) to seven (7) years to produce exports worth US$2 billion per year from each of the seven crops. In other words, the aim is to generate up to US$14 billion per annum, compared to only some US$2 billion from cocoa this year. Government has so far distributed fifteen (15) million certified seedlings of the selected crops to seventy-six thousand, one hundred and seventeen (76,117) farmers through the District Assemblies,” President Akufo-Addo said.

True to Government’s promise of mechanizing agriculture, the President revealed that farm machinery worth $33 million has been imported from Brazil this year to support agriculture.

This is made up of two hundred and fifteen (215) tractors, two hundred and thirty-one (231) farm implements, one hundred and forty-one (141) maize shellers, twenty-five (25) multi-crop threshers, sixty-eight (68) planters/seed drills etc.

These, according to the President, are available at 40% subsidised cost to farmer Associations, private investors and selected District Assemblies for the establishment of Agricultural Mechanization Centres (AMSEC’s) across the country.

“We expect a substantial expansion in 2020 through the disbursement of the last tranche of a US$33 million loan from Brazil and a US$150 million facility from Eximbank of India,” he added.

Government, the President explained, is promoting the production of high-value horticultural crops, mainly vegetables, using greenhouse technology. Thus far, three greenhouse villages have been established at Dawhenya, Akomadan and Bawjiase under this module of the PFJ.

The prime targets of this intervention are the youth and women. So far, two of the greenhouse villages at Dawhenya and Akumadan have provided training to over one hundred and fifty (150) agricultural graduates and diploma holders.

The introduction of greenhouse villages, he said, holds great prospects for the country, given the modernised production system with cutting edge technology. 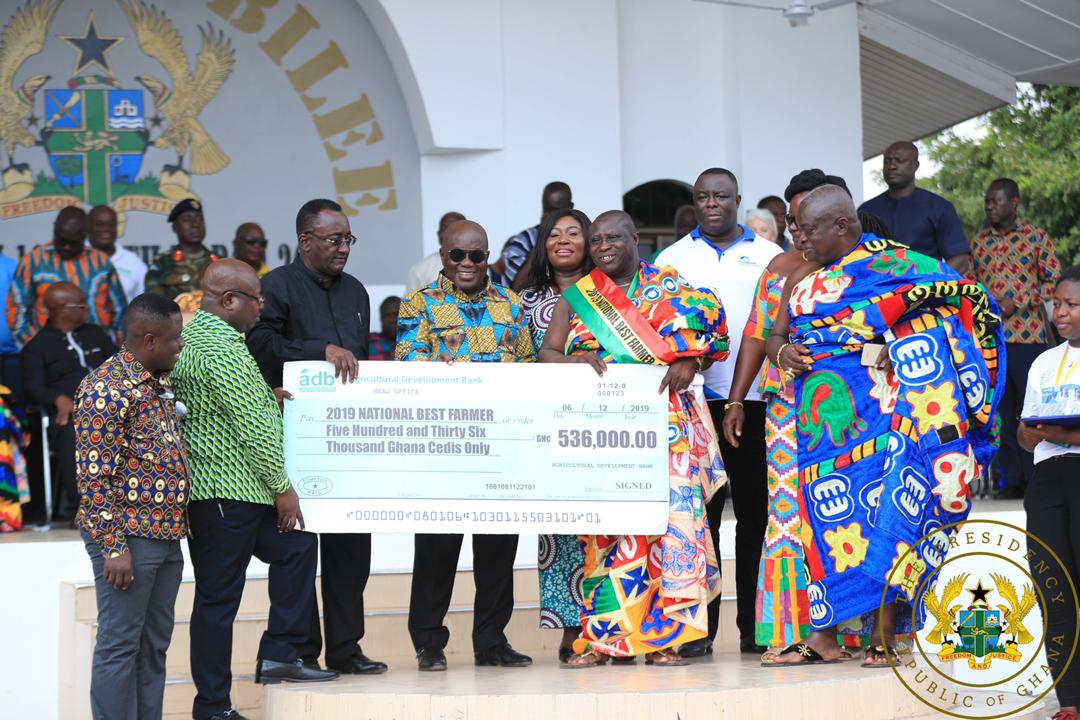 “Last week, I cut the sod at Pwalugu to begin construction of a dam and a twenty-five thousand (25,000) hectare irrigation project. Government has made significant strides in the construction and rehabilitation of dams and dugouts throughout the country. This is to ensure all-year-round crop production, to guarantee increased farmer income through increased output,” President Akufo-Addo said.

He told the gathering that a total of 65,600 hectares of irrigable land has been earmarked for completion under on-going projects at the Kpong Left Bank, Tono, Guo, Mpromem, Tamme, Piyire, Bui and Pwalugu irrigation schemes.

In addition, close to 100 hectares of land have been put under irrigation, using surface water abstraction technology and solar water pumps. Two hundred 200 boreholes, with mounted solar pumps to harness groundwater for crop production, are also being constructed in various parts of the country.