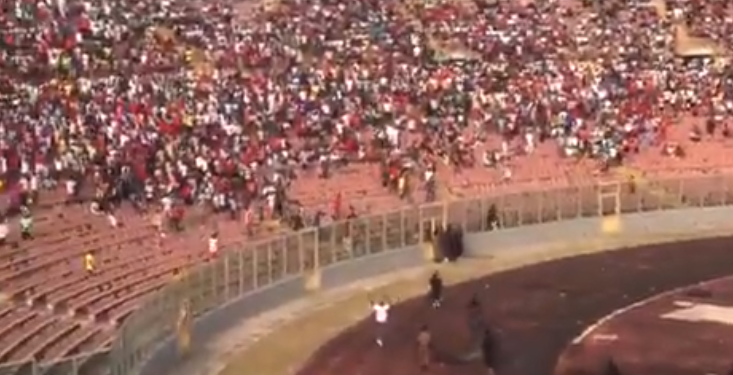 Although initial reports on social media suggested that the fan had died, he is currently receiving treatment at the Emergency Unit of the Komfo Anokye Teaching Hospital.

Videos shared widely on social media showed a man covered in blood, initially writhing in pain on the floor outside the Baba Yara Stadium before being carried away, presumably to the hospital, by some onlookers, leaving a bloody spot on the ground.

The match itself ended 1-0 to Chelsea, with Kofi Owusu getting the only goal of the game.

Fans of the Porcupine Warriors were up in arms over a decision by the referee, which resulted in defender Empem Dacosta being sent off.

The crowd felt that the referee had erroneously given Dacosta the card, as they believed the initial incident had involved another of their players, Kwame Adom and an opposing player.

The yellow card flashed by the referee to Dacosta proved costly, however, as he was already on a card.

A number of Kotoko fans started throwing items, including water bottles onto the pitch.

The match was held up for a number of minutes as officials tried to regain control of the crowd, resulting in eight minutes of added time after 90 minutes had been played.

There are reports of violence at the Baba Yara Stadium during the Ghana Premier League game between Kotoko and Berekum Chelsea.

Fans, however, resumed throwing objects on the pitch, with a few managing to gain access to the inner perimeters of the stadium before being chased back by security.

Some videos showed some of the Kotoko players pleading with the fans to stop.

The referee and his assistants were eventually safely escorted off the pitch.