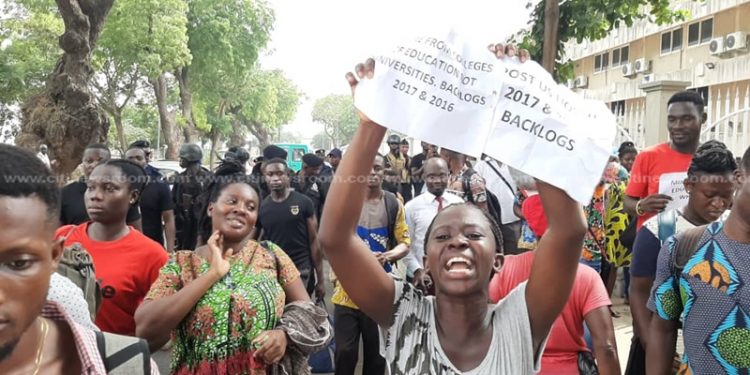 The 19 teachers who were arrested on Monday, 13th January 2020 for unlawful picketing at the Ghana Education Service (GES) Headquarters are appealing to the government to have mercy on them and employ them because they are going through hard times.

Speaking in court today [Monday] after the case brought against them had been referred to an Alternative Dispute Resolution (ADR) process, leader of the accused persons, Kennedy Sinpeh Agyei said they are begging the authorities to ensure they are posted.

“Now we are just pleading because we can’t force them to post us and we can’t do anything anymore so they should just look at us because we are all Ghanaians and we are qualified to be posted and we are willing to teach at any place we may be posted to. So, we are just begging them, they have the power, they have the authority. We are begging the Minister of Education and the Director-General of Education that we are all trained teachers. The fact that they deferred our courses doesn’t mean that we failed our papers. We are qualified, we have the papers. We have written our licensure exams and completed our national service so they should also look at us and consider us, the frustration and the pain that my people are enduring in the house is hard so we are just begging them”.

This decision was taken by the judge sitting on the case when the accused persons pleaded not guilty.

The teachers have been charged with unlawful assembly and offensive conduct. Lawyers representing the teachers while insisting on the innocence of their clients argued that the geographical location of the suspects will bring untold hardship to them if the case continues.

Bede Kutuu, one of the lawyers for the teachers explaining proceedings in court today [Monday] questioned the fact that the police are both the complainants and the prosecutors.

“We explained our side to the court, and the court being magnanimous enough to grant them self-recognizance bail, meaning that there will not be the need for anyone to come and sign bail for them before they can go. And the court has referred the matter to ADR, and ADR means that they are not coming back to court. They have to go to a neutral person who can sit them down and try to resolve the matter amicably and report back to the court as early as possible on Wednesday. According to the facts presented, the police are the complainants and the same police are the prosecutors so when we get there, we will cross”.

The teachers who completed the various Colleges of Education in 2018 accused the GES of not posting them despite the completion of their mandatory national service and licensure certification.

“The non-posting has affected me in many ways because for now, I can’t eat, I can’t go out and my mother is no longer taking care of me because she feels all the money she invested in me has gone waste.  I am really suffering and is an embarrassment because I graduated with many other people and I am still in the house.”

The protesters who were arrested say they had been invited by the GES, a claim disputed by GES officials.

“We followed up and we had information that they haven’t sent any information to that effect. So they were advised to vacate the premises since they had not been invited but the leaders said they were not leaving,” one lady narrated.

Subsequently, the case was heard on January 15, 2020, but had to be adjourned.