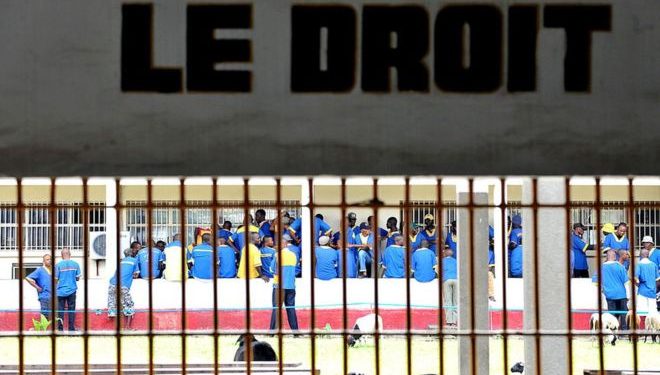 At least 17 prisoners have died over the past week in the Democratic Republic of Congo’s biggest prison, a charity says.

Aid workers say the deaths were caused by a lack of food and medicine, as well as poor hygiene.

Makala Prison in the capital, Kinshasa, has received no food supplies in the last two months, state officials say.

“It’s terrible! People are dying almost every day,” a prison official who did not want to be named told the BBC.

Food shortages mean the more than 8,000 prisoners who live there rely on their families to bring in meals.

The facility is also severely overcrowded, with more than five times the number of inmates it was built for.

Conditions are so poor that non-governmental groups estimate at least 100 prisoners are gravely ill and close to death.

Only 6% of the prisoners are actually serving sentences – the rest are stuck in DR Congo’s legal system where cases can drag on for years.

“It’s true, there was a delay in paying suppliers and this explains the break in supplies,” Celestin Tunda Ya Kasende told AFP, adding, “the situation was put to rights” on Monday.

He promised that more money would follow, but the BBC’s Gaïus Kowene in Kinshasa says human rights organisations remain skeptical.

Last year, it was reported that 40 inmates had died in similar circumstances over an 18-month period in another prison in DR Congo.