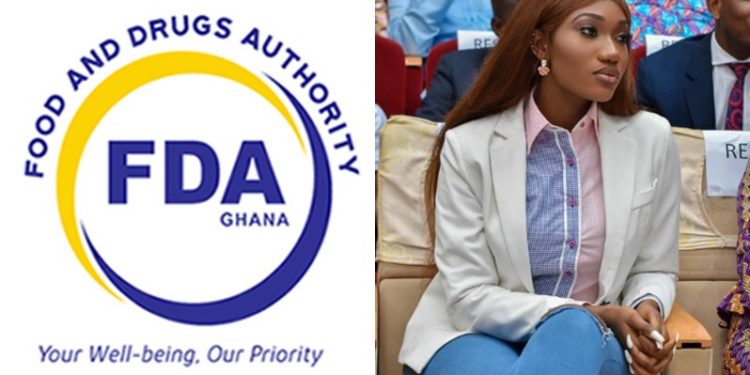 The Food and Drugs Authority (FDA) has taken on Ghanaian artiste Wendy Shay over some comments she made recently with regards to a policy barring celebrities and other influential people from advertising alcoholic beverages.

Wendy Shay complained that the policy has made her lose valuable deals.

The ‘Uber Driver’ hitmaker earlier on Thursday said she did not know such a law existed till it was too late.

According to her, it is outrageous for the Food and Drugs Authority (FDA) to take from them even the little they make.

“I just lost a deal worth 1000s‘ of dollars with this foreign alcohol company…I didn’t know in Ghana Celebrities can’t advertise for alcoholic beverages according to FDA. Like Seriously?! Small food we go chop too u wan take 4rm our mouth. Gh celebs wake up !!FDA Lift dat ban!!” she tweeted.

But the Authority in a Facebook post said it is “not trying to take food away from your mouth,” but rather, the decision is to protect young people from abusing alcohol.

The FDA in responding to Wendy Shay’s tweet said;

The guidelines on the advertisement of food states clearly that no well-known personality or professional shall be used in alcoholic beverage advertisement.

The FDA is not trying to take food away from your mouth but rather trying to protect the young ones who idolise you from the abuse of alcohol.

On the other hand, we can collaborate with you to use your influence to educate the youth against alcohol abuse.

In 2015, the Food and Drugs Authority (FDA) banned celebrities from advertising alcoholic beverages.

The FDA said at the time that the ban was not only in adherence to a World Health Organisation policy but was part of efforts to protect children and prevent them from being lured into alcoholism.

The FDA subsequently in 2018 announced that the advertisement of alcoholic products TV and Radio must be limited to after 20:00GMT.

According to the Public Relations Officer (PRO) of the FDA, James Lartey, this move became necessary because the number of alcohol ads aired in the day was too many and not a good thing for minors to get exposed to.

He said, flouting this directive attracts 15 years term in prison and fine of about 7,500 cedis.