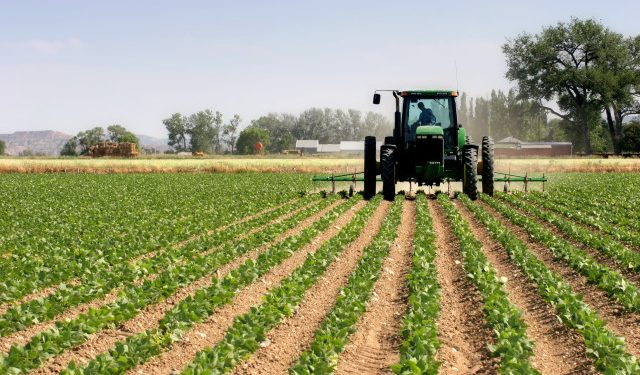 farmer on his tractor plowing the field, rural wyoming

Demand for mechanized farming operations among smallholder farmers in the Northern Region has been on the increase since the early 2000s.

Research conducted in 2018 by the International Growth Centre in collaboration with the Institute of Social and Economic Research (ISSER), University of Ghana, indicates that more than 90% of farmers in Northern Ghana now rely on tractors for ploughing.

This may be attributed to the opportunities agricultural mechanization presents, through a reduction in drudgery, increased acreage and timely cultivation.

However, access to tractor services has been a major challenge among farmers in the area.

The smallholder farmers who constitute the majority of farmers in the Northern Region cannot afford to buy or own tractors and so rely on hired tractor operators to provide land preparation services at the onset of the growing season.

They struggle, sometimes in vain, to access tractor services to till their lands.

Competition for tractor services is further heightened by the fact that the Northern Region has only one farming season and provides a narrow planting window for farmers when the rains set in.

Though most of the farmers eventually get access to tractor services, it comes later in the season when the planting periods of most of the crops are over.

Those who fail to get tractors to till the lands, use alternative means of planting their crops.

This perennial problem has posed a serious hindrance to effective farming, contributing to low yield and worsening the plight of the poor farmer.

A smallholder farmer at Kulaa in the Sagnarigu Municipality, Mahamadu Zakaria was unable to get access to tractor to plough his rice farm during the last season.

He eventually had to broadcast the rice on the untilled land and later applied weedicide to control the weeds.
He harvested about 15 bags of rice from a field he usually makes about 30 bags.

“Access to tractor services is a major challenge to us here. The best time to farm in this community is at the onset of the rains. If you delay in cultivating your land you get low yield. I tried so hard to get a tractor this year but to no avail. I decided to broadcast the rice in the bush and applied weedicide. As a result, I did not get much from the farm,” he lamented.

Individual medium and large scale farmers who own tractors are usually overwhelmed by the large numbers of farmers who require their services.

Private companies and individual tractor owners also bring in tractors from the Ashanti Region and other parts of the country to augment the existing ones in the Northern Region.

However, these services rendered by the private sector and the numerous interventions by current and successive governments have not successfully dealt with the situation.

“Farmers suffer a lot to get tractors to plough their lands. This often results in late farming and consequently in low yields. If we had enough tractors here, farmers would be able to farm on time and maximize yield,” Abukari Zakaria Yaw, a farmer and tractor owner at Kumbungu in the Kumbungu District said.

Farmers at Zugu in the Kumbungu District, Wovoguma and Kpintaliga in the Sagnarigu Municipality shared similar concerns.

The Acting Northern Regional Director of the Ministry of Food and Agriculture (MoFA), Hajia Hawa Musah said her outfit was aware of the challenge but indicated that MoFA was working hard to increase the number of tractors in the region to enable farmers get easy and early access to tractor services.

Hajia Musah said the government had also subsidized the prices of farm machinery to enable farmers afford them.

Agricultural Mechanization Service Centres (AMSECs) was an idea mooted by government in 2007 to support the private sector to provide affordable and timely access to power machineries such as tractors for effective land preparation, planting and harvesting.

However, the Secretary of the Northern Region Farmers Association, Alhaji Mahamoud Alhassan told The Finder that the AMSECs programme has not proven effective enough to make a lasting impact on smallholder farmers.
Alhaji Alhassan said if the AMSECs programme had worked effectively, the problem of access to tractor services would have long been a thing of the past.

Lack of supervision and undue politicization

He blamed the ineffectiveness of the programme on lack of supervision and undue politicization of the process.

“What is bedevilling this our country is that anytime there is a programme, no one supervises it to actually see what the challenges are and the problems people are facing. No one does it and even if you write a report, no one will bother about it and that should not be the case.”

“Most of them (AMSECs) are not working. Most of them have collapsed. We should be truthful with ourselves, they have collapsed. Those that are there are just doing something to represent something. If they were thriving we shouldn’t have problems with machines in the system,” he lamented.

“Sometimes the government’s intention is okay but along the line, you have opportunists who come in to pick these AMSECs and before you realize they have sold more than half of them to people. I don’t know, but some time ago I heard that our tractors were found in Togo and Burkina Faso,” she said.

Alhaji Alhassan also identified the frequent breakdown of tractors as a major challenge tractor owners are faced with.

He said farmers must pay realistic prices for ploughing to enable tractor owners meet the increasing cost of spare parts.

“The main challenge is that realistic prices are not being paid for tractor services and that is the main cause. If you go to the spare parts dealer, he will never reduce [the price]. So you will be running at a loss and in the end, you will lose all the machines,” he lamented.

The training programme aims to solve the problem of frequent breakdown and lengthy downtime of tractors and accessories primarily due to incorrect care and handling of the equipment.

The farmers appealed to the government to provide each community with at least one subsidized tractor on a high purchase basis to help mitigate their plight.

“The difficulty in accessing tractors poses a threat to farming here. Due to the nature of the soil here, it is always advisable to cultivate early but because of the lack of tractors in this community, it is not possible for everyone to farm within schedule. We are therefore appealing to government and non-governmental organizations to identify individuals in this community who can afford the subsidized tractors and help them acquire them so that we can have easy access to tractors in the next farming season,” Zakaria appealed.

Alhaji Alhassan argued that the AMSECs programme is not a viable business model and called on the government to constitute a stakeholder consultative forum to deliberate on a sustainable solution to the problem.

On what is being done to save the situation, Hajia Musah said the government was in the process of identifying individual business-oriented farmers to support them with farm implements who can, in turn, render services to smallholder farmers.

“If you go to Diare, we have a farmer who has more than 2000 out-growers so the ministry has also sold 11 tractors to him, two combined [harvesters] and a thresher. So the minister is passionate about developing agriculture,” she assured.

The Vice-Chancellor of the Miller Institute for Transdisciplinary and Development Studies, Professor David Miller, however, thinks subsidizing farm machinery for already well-to-do farmers opens the floodgates for the exploitation of smallholder farmers.

He advocated for the setting up of production units to target the smallholder farmers with subsidized implements.

Prof. Miller said large scale commercial farmers should be allowed to buy the equipment in the open market.

“They are just preparing the grounds for exploitation. You know, our season is such that it’s timely. When it is time (for farming), a few people who have the equipment, price it anyhow and if you don’t farm within the first month then you are on your way to losing the opportunities that the season has. So you are just going to give subsidized tractors to big-time farmers who will then take advantage of the people and start exploiting them.”

The former Pro-vice Chancellor of the University for Development Studies (UDS) however believes that the private sector holds the key to resolving the problem and urged private enterprises to invest in the sector.

Prof. Miller also cautioned the government to avoid the temptation of over concentrating on what he called tractorization to the neglect of other farm machinery needed in the production process.