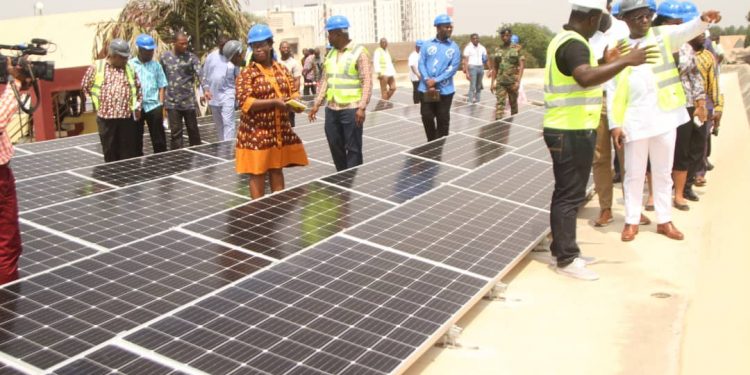 The much-anticipated installation of Solar panels at the Jubilee House has begun.

The 912 kilowatts solar panels are expected to power the seat of government by 60 percent.

Energy Minister, John Peter Amewu who toured the facility on behalf of the President says the project will be completed by June 2020.

“We expect that it will be completed in six months. So depending on the speed with which the engineers are working, it should be done before July. I have that assurance to Ghanaians. The capacity I am told is 912 kilowatts. It will not be able to power the whole Jubilee House so this will come in as a supplement.”

The government made the announcement about a year ago with an August 2019 timeline.

This according to the government was to enable state agencies to follow suit in an all-time bid to minimize the high cost of utility bills incurred for state-owned institutions.

President Akufo-Addo who made the announcement in Parliament said it was time for Ghana to adopt renewable forms of energy because of its inability to achieve universal utility access although the country generates electricity in excess capacity.

“Jubilee House will also be powered, as from August this year, by solar energy, as an example to other public institutions. In fact, the government’s target is to install up to 200 megawatts of distributed solar power by 2030 in both residential and non-residential facilities in order to reduce Government’s liabilities to ECG.”

“Another justification for renewable energy is that, in spite of Ghana’s excess electricity generation capacity, we can still not achieve our universal access target because there are many Ghanaian communities, especially those on islands and lakesides, that cannot be reached through the national grid. For example, there are currently two hundred (200) island and two thousand (2,000) lakeside communities that require mini-grids from renewable sources to meet their energy needs,” he added.

“To reduce government’s expenditure on utilities, and also promote the use of solar power for government and public buildings, the Ministry of Energy initiated the Solar Rooftop Programme. The Ministry is leading by example with the installation of a 65-kilowatt solar rooftop system at its premises.”

He added that renewable energy has also become a necessary addition to our energy sector because it has become cheaper, and is key to the implementation of our international obligations under SDG on access to affordable, reliable, and sustainable energy, as well as SDG on urgent action to combat climate change.

Though Ghana is endowed with renewable energy resources, only 0.6 percent of the energy supply (excluding hydropower) is from renewable sources, a study has revealed.

The frequency of the energy crisis in Ghana, as well as the magnitude and effects since 1984, coupled with the increasing demand for energy, has resulted in the search for alternative energy sources for electricity.

Ghana’s Ministry of Energy in 2009 predicted the demand for electricity would be “growing at 10% per annum which requires approximately 200 MW additional power annually.”

Hydropower which Ghana is dependent on is susceptible to drought, high temperature and low rainfall; the study quoted government sources.

Complaint against Sammy Gyamfi was not politically motivated – Presidency

Complaint against Sammy Gyamfi was not politically motivated - Presidency