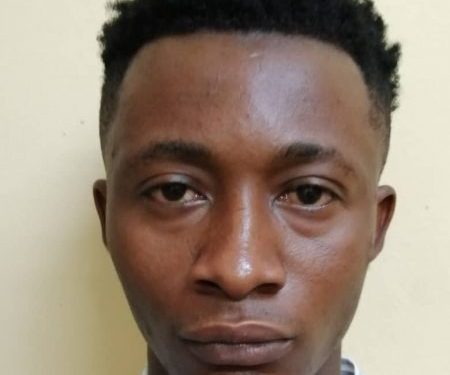 A young man with name Nuetey Latif Ahinguah has been slapped with a 12-month prison sentence with hard labour for impersonating the Minister of Finance, Ken Ofori-Atta on social media.

On Wednesday, January 22, Nuetey Latif Ahinguah, also known as Oliver and Emmanuel Asare, appeared before the Kaneshie Magistrate court in Accra for defrauding by false pretences.

According to the charge sheet, Ahinguah and his accomplices began creating fraudulent Facebook accounts in 2018.

Apart from targeting the Minister for Finance, they also created accounts in the name of National Security Minister, Albert Kan-Dapaah.

“The criminals used the accounts in defrauding unsuspecting people under the pretence of securing them employment, and cars to buy at very ridiculous or ‘give away’ prices.”

“Unsuspecting people fell prey to these criminals and transferred several amounts of money to the fraudsters on a given mobile money number,” read the charge sheet.

The Magistrate court, presided over by Her Worship E.B. Botchway, convicted the accused to serve a twelve-month jail sentence after Ahinguah pleaded guilty for the offence of defrauding by false pretences.

Security agencies say investigations are still ongoing in an attempt to arrest Ahinguah’s accomplices, among others, for fraudulent acts both within Ghana and abroad.

Since assuming office as Finance Minister, several fake social media accounts have been opened under the name of Ken Ofori-Atta or Kenneth Ofori-Atta.

The Finance Minister is yet to open an official social media account.

There has been an increase in the use of fake social media accounts to rob people of their money and other valuables.

Since August 2019, Ghana’s Security Agencies have recorded a significant upsurge in the use of fake accounts, particularly on Facebook, used for swindle unsuspecting citizens.

The government continues to caution the public to desist from the use of fake social media accounts in duping people.

In a statement, it indicated that these accounts are usually created to mimic that of public institutions and public figures, and offers opportunities ranging from jobs to Senior High school placements.

“These unverified accounts are mostly created in the names of Public Institutions, Ministers, Members of Parliament and other public figures. The accounts are used as platforms to promise jobs, scholarships, contracts and senior high school/ national service placements. In exchange, victims are lured into making advance cash payments to secure the offers.”

The government said even though efforts are being made to combat the menace, the public must be cautious when dealing with such accounts on social media especially Facebook.

“Though the Security Agencies and Social Media Service Providers are making the necessary efforts to clamp down on these activities, government hereby calls on the general public to heighten its sense of awareness on social media, particularly when dealing with accounts purporting to be those of government officials. The public is advised not to transact any pecuniary business with accounts of government functionaries via social media and encouraged to report such incidents to the Police immediately”.