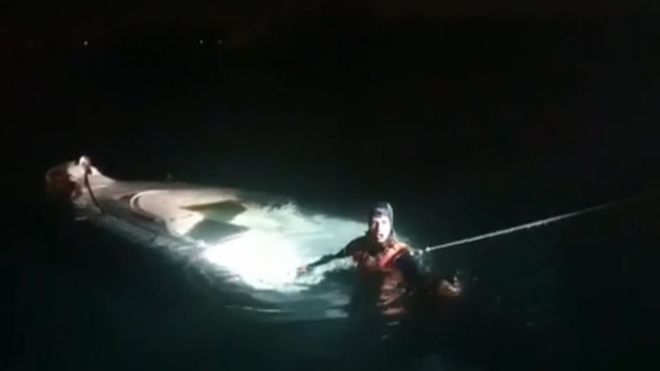 Eight children were among the 11 migrants who drowned when their boat sank off Turkey’s western coast, state media report.

Eight other people were rescued from the waters off Cesme, a tourist resort on the Aegean coast opposite the Greek island of Chios.

Their nationalities are not yet known.

Turkey has been a key transit point for migrants trying to reach Europe, mainly via Greece. Many are fleeing violence and persecution in their countries.

Many rely on people smugglers and face dangerous land and sea routes which often result in deaths. In 2016, Turkey reached a financial deal with the European Union to stem the flow of migrants and refugees to Europe.

The Turkish Coast Guard said it responded to “screaming sounds” from the sea at around 20:30 local time (17:30 GMT) on Saturday.

Cesme is just 15km (nine miles) from Chios, where thousands of migrants are living in overcrowded and unsanitary conditions.

The number of people crossing from Turkey has risen sharply recently. Most of them are coming from Afghanistan, Pakistan and Syria.

Turkey is home to some four million refugees, the largest refugee population in the world, and over 3.6 million of them are from Syria.

Hours earlier, another migrant boat sank in the Ionian Sea near the south-western Greek island of Paxi, leaving at least 12 dead. Greek officials said 21 people had been rescued and that they were still trying to determine how many people were on the vessel.

The nationalities and age of the migrants have not been confirmed.